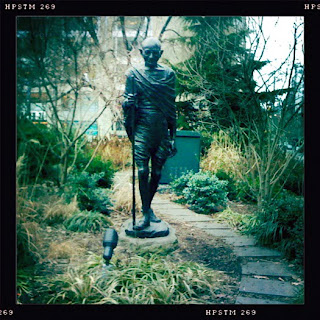 On March 12, 1930, when Mohandas Karamchand Gandhi (1869-1948) set out on his 240-mile march to the seaside town of Dandi to protest the British tax on salt, he was joined by 78 followers. As the walk continued and the word spread of his unconventional means of protest, thousands more joined in the nonviolent protest against the injustices of colonialism. By the time he arrived on April 5, Gandhi had attracted the attention of the whole world.

Marches and walks as a form of demonstration were not new, finding precedents in cities in the 19th century. Years before the March on Washington in 1963, civil rights and labor leader A. Philip Randolph and others had proposed a march on Washington in 1941 to protest discrimination in the war industries. The march was called off after President Franklin D. Roosevelt signed legislation pledging fairness. Randolph, Bayard Rustin, and Martin Luther King, Jr. organized the March on Washington for Jobs and Freedom, the historic event of August 28, 1963 when an estimated quarter of a million people took part in the walk from the Washington Monument to the Lincoln Memorial. That walk, in terms of distance, was not long. It was the symbolism that mattered. The 54 miles from Selma to Montgomery in March of 1965 proved to be more physically difficult.


By 1966, challenges to the strategy of nonviolence emerged within the civil rights community. Responding to the calls for more direct confrontations, King articulated the effectiveness of the marches and boycotts. In the 1966 essay, "Nonviolence: The Only Road to Freedom," he writes about the power of marching:

"The power of the nonviolent march is indeed a mystery. It is always surprising that a few hundred Negroes marching can produce such a reaction across the nation. When marches are carefully organized around well-defined issues, they represent the power with Victor Hugo phrased as the most powerful force in the world, "an idea whose time has come." Marching feet announce that time has come for a given idea. When the idea is a sound one, the cause is a just one, and the demonstration a righteous one, change will be forthcoming. "

In other words, walking for justice is much more than a solitary stroll.

• "Introduction to special issue: "the civil rights movement in New York City" from the Free Library provides an excellent overview of the key ideas and events.

• SoulofAmerica.com, a website for Black Cultural Travel, has a page with a summary of the civil rights movement in New York.

Image: The statue of Gandhi in the southwest corner of Union Square Park was presented to the city by the Gandhi Memorial International Foundation and dedicated October 2, 1986. The bronze sculpture is by Kantilal B. Patel.