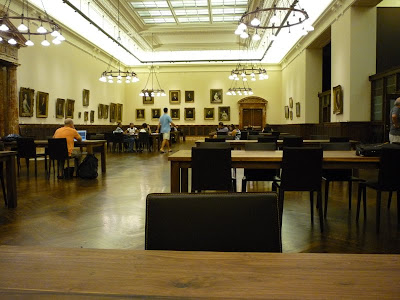 Needing a change of work space other than my own living room, one with more gravitas than a place where dogs bring me squeaky toys, I went uptown to the main branch of the New York Public Library this afternoon. I mainly wanted to try out the new wi-fi room the library made available this summer - the Edna Barnes Salomon Room. on the library's 3rd floor. Across the way from the Bill Blass Public Catalog Room and the Deborah, Jonathan F. P., Samuel Priest, and Adam R. Rose Main Reading Room (we can sure name them here, right?), the 4,500 square foot space has just the right amount of ambient light and classical proportions for concentrated work. After looking at the paintings along the wall, including many portraits of the Astors as well as other notables, I chose a space at a table in the back of the room near a 1971 portrait of Truman Capote. I remembered that Capote set an important scene in Breakfast at Tiffany's in the reading room of the main library.


After reading and completing my tasks, I walked over to the public catalog room and the main reading room in order to watch others work. The sublime Beaux-Arts setting with marble walls, table lamps with gold shades, oak tables, and ceiling paintings depicting billowing clouds seem conducive to reading, even if the medium is a computer monitor instead of a book. Not everyone was studying, of course, but at least the room established the mood for introspection and thought.

Leaving the library by way of the Fifth Avenue entrance, I walked down the steps and passed the lions and walked west on W. 42nd St. to the rear of the building and to Bryant Park. Many people were sitting and talking in the park on this warm and humid afternoon. We had a huge storm in the city last night, a fierce tempest that ravaged many trees in Central Park (NYT City Room story), so I would imagine that many people were talking about it.

See more about the New York Public Library's Edna Barnes Salomon Room in the press release here. Laptops are available for lease. The main branch is now called the Stephen A. Schwarzman Building, named for the businessman who has contributed $100 million for the building's renovation.