A Stroll Through the East 60s 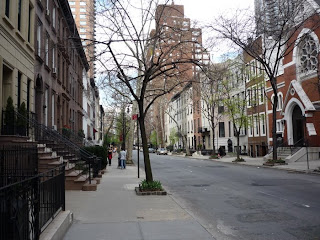 The walk on the Upper East Side this past Saturday, the one in which I retraced Walker Evans and his photographs of a block on E. 61st in 1938, took me on a longer stroll. Thanks to the picture-perfect weather, I also walked through the small but lovely Treadwell Farm Historic District, a neighborhood of well-preserved row houses and tree-lined streets on East 61st and East 62nd streets between Second and Third Avenues. Many of the houses were originally built in the custom Italianate and neo-Grec styles of the day but were later modified, often by stripping the large front stoops, to give them a neat, flat appearance on the street. The elegance attracted several celebrities, including Montgomery Clift, Tallulah Bankhead, and Eleanor Roosevelt, who chose to live along these blocks.


View A Walk in the East 60s in a larger map 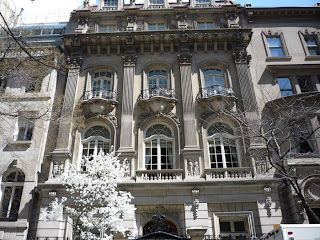 E. 62nd then picks up the aesthetics of the Treadwell district, and it's nice to stop and look at Tallulah's former residence at 230 just to imagine what went on inside. Farther west, check out the cheese shop, Cheese on 62nd, and notice the beautiful-looking fromages, including one called "Barick Obama." I must have looked hungry or curious or both, because I was invited inside to taste some cheese. Delicious samplings, and the folks there enjoy sharing their enthusiasm. Across the street is the famous Tender Buttons, the shop that specializes in buttons. Keep going west, and E. 62nd enters the Upper East Side Historic District. The mansion at 11 E. 62 St., known as the Fabbri House, was originally commissioned by Margaret Louisa Vanderbilt Shepard (eldest daughter of William H. Vanderbilt) as a gift to her daughter and son-on-law. The Beaux-Arts house is pictured here. A touching gift, yes?