While out strolling along the Fifth Avenue store windows last week, I wandered into the Trump Tower atrium for a bit to look around, and then I walked into the adjacent atrium of 590 Madison Avenue (formerly known as the IBM building). And what to my wondering eyes should appear, but an odd convergence of Jean Dubuffet, Mozzarelle di Bufala, and NASCAR all here? 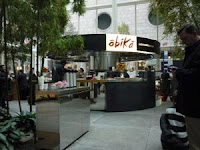 "Twas a strange sight, the NASCAR cars parked inside the lobby of this early '80s bamboo-ed, glassy atrium. The occasion for the cars was NASCAR's annual New York Victory Week. But more kooky 'twas this pop mix-tape of the cars with Dubuffet's Welcome Parade and the newish mozzarella bar, Obikà. The latter features Mozzarella di Bufala Campana DOP, a premium cheese made from the milk of water buffalo cows, and all the trimmings. Just like NASCAR fans like it. Jean Dubuffet's sculptures were originally designed for I.M. Pei's East Wing of the National Gallery, but the project succumbed to financial plights. Gallery PaceWildenstein recently assembled them as part of the exhibition, The Hourloupe Cycle.

The inter-mix of mozzarella, French Pop, and high-octane invited a hard match-making question - Who here loves Jean Dubuffet, Mozzarelle di Bufala, and NASCAR? Raise your hands. Then y'all should meet up. I've got a place for you.

Images of the atrium of 590 Madison Avenue, December 5, 2008 by Walking Off the Big Apple.