WOTBA 2.0: Walking Off the Big Apple and the IPhone 3G Experience 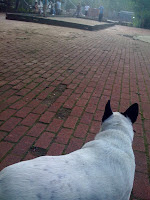 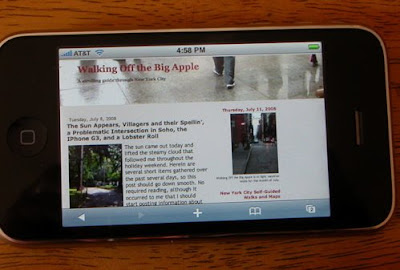 Well, that took all day.

After the sunny optimism of being only about the 200th customer at an ATT store on Broadway near 8th at 8 a.m., and finding camaraderie on line (word of the 1500 or so people at the Apple Soho nearby and how smart we were to stand there), and finding OK cheerleading from the support staff to help, and somewhat relieved I wasn't waiting for the bigger 16 GB (because all I need is WOTBA-on-the-go and not too many songs) as they sold out early, I made my way through the tender check-out process only to find out a little trouble on the home front with ITunes and the alarming global stampede at the gates of the concert.

By one o'clock, I felt like no longer like a chic sophisticated woman but more like an 18-year-old boy who has lived in his parent's basement for a couple of years and neglected to bathe and shave. At some point, I abandoned all the hardware and software for the healthier pursuit of fresh air and a walk with the dogs in the park. A bubble bath and some refreshment were all I needed to kill the time while the Internet gods straightened themselves out.

So, voila. The IPhone - all activated, registered, and consumed. I look forward to getting back to the basics -literature, art, culture, food, and the streets, as soon as possible.

If interested, Walking Off the Big Apple's Google supplemental maps to many of the self-guided New York walks work well on this particular device and should on others.

Images: WOTBA's now-successfully activated IPhone, and a camera phone picture of a chubby dog watching the bocce ball action in the park.