Walking Off the Lower Side: Bagels, Rugelach, and Cupcakes 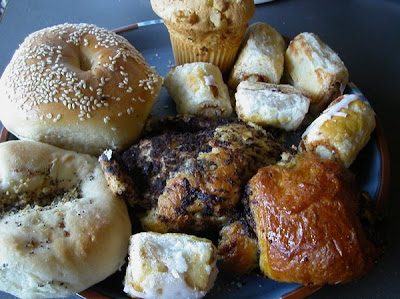 And isn't a great neighborhood half about the bakeries? What's the Lower East Side without these? While out walking along Grand Street and East Broadway on the Lower East Side this morning, I couldn't help myself from wandering into the local bakeries and picking out a little something to take home. Or a few somethings. Another reason why I have to walk so much.

Several of the shopkeepers struck up a conversation with me. They first of all wanted to know where I was from, and after I explained that I was from way yonder west in "the Village," I guess that sufficed for an answer. I must have that unique West Village accent...er...uh, y'all.

Moishe's Bakery, 504 Grand Street. I wanted a little of everything, but I decided to restrain myself by settling on a lone large chocolate pastry that's somewhere between a rugelach and a babka. I was told I made a really good choice.

East Broadway Kosher Bakery, 363 Grand Street. A half dozen cinnamon rugelach, perhaps? These are winners, by the way. Two are already gone. 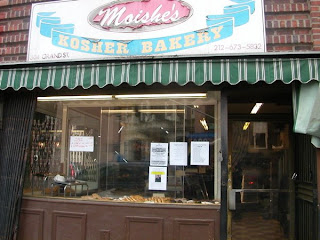 Golden Carriage Bakery, 162 East Broadway. Maybe the walnut cupcake. Interesting. For a Chinese bakery on the Lower East Side, the cake tastes a lot like my East Texas mother's pound cake.

Seriously, I think neighborhoods come down to these ingredients: children, seniors, libraries, affordable housing, and shops. Not box stores with corporate structures, but neighborhood shops with local shopkeepers, customers, and history. And food, with cultural histories.

Images: Assortment of pastries from the Lower East Side. May 20, 2008, and Moishes Bakery, 504 Grand Street.

Steverino said…
Thanks for the info, I'll be using for my day in the LES.
2:21 PM