The Telectroscope at the Fulton Ferry Landing 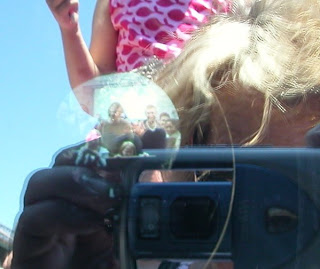 Born of artist Paul St. George's fascination with the spectacular inventions of the late 19th century, the Telectroscope, one in New York at the Fulton Ferry Landing near the Brooklyn Bridge, and the other in London at Tower Bridge on the south side of the river, does look like something out of H.G. Wells or Jules Verne. Inventing an imaginative back story, St. George credits his great-grandfather for discovering a method for distant viewing by means of a tunnel in the Atlantic Ocean.

The very real "illusion" is uncanny. Though I knew in advance that the device uses internet cable that transmits fast video, as I looked through the human-size scope at the people gathered on the other side in front of the Tower Bridge, I immediately suspended my disbelief. Wow! Those are Londoners I'm seeing in real time by means of a giant subterranean Atlantic tunnel. No tricks! No Internets!

After visiting the Telectroscope this past Sunday morning, just part of a fun sun-filled Memorial Day weekend, I chanced late in the day to fire up the World Wide Web and watch NASA's Phoenix Mars Lander beam back the first images from a mysterious wasteland on the Red Planet. Marveling at the clarity of the images, stunned a little that I would live so long as to see photos of Mars on my amazing personal computing device (yesterday was my birthday), I nevertheless felt a little disappointment looking at the barren-looking landscape of the famous planet. I've seen areas of West Texas that look like Mars, and there weren't many signs of life in those 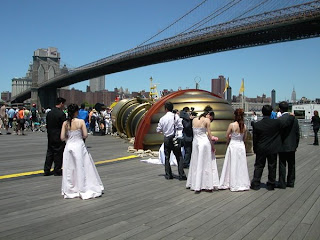 places either. I guess I was hoping for something more, maybe a group of curious Martians, smiling and waving at me from the other side.

The Telectroscope (official site) installation continues through June 15, 2008 in London and New York.

Related news article from the Telegraph.co.uk : The Telectroscope, London's window on New York.

Images: Yours truly, at the Fulton Ferry Landing, in Brooklyn, taking a picture of the people in London; and a wedding party on the Fulton Ferry landing, on the back side of the Telectroscope.