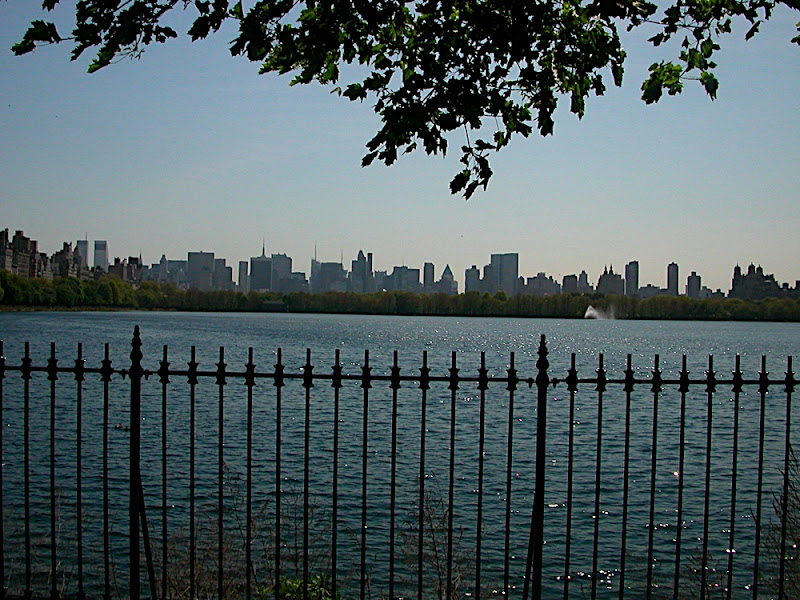 This would be the Jacqueline Kennedy Onassis Reservoir between 86th and 96th in Central Park, and I just walked around it. Several people were out walking around this large body of water, but most were running for some reason. Many runners passing me were outfitted with heart monitors, expensive running shoes, and portable MP3 players, and I felt kind of out of it, as I was wearing a prom dress and carrying a MacBook. Just kidding about the prom dress.

I like walking, but I find strolling around the reservoir 90% tedious. Several times I ventured down to the nearby bridle path and walked sections along in there. It's more leafy. Over on the east side of the park, I thought about ditching the whole effort and going to one of the museums that line the park on the east, maybe the Cooper-Hewitt. But I moved on. On the northwest side, I walked down to the tennis courts and thought how much fun it would be to play tennis again, perhaps in a prom dress, and then I walked back up to the reservoir's running and walking path to complete the walk. The 10% I liked was watching waterfowl and looking at the midtown skyline from the north shore and maybe that one guy running without his shirt.

I'm back at the Delacorte Theater now (Wifi access again), and nearby hundreds of people are hanging out and sunbathing at Turtle Pond. The pace has slowed down. Olmsted and Vaux, when designing the park, couldn't at the time envision that hordes of people with heart monitors would be someday enjoy running through it.

Visit additional photos of the spring week in Central Park on Flickr WOTBA.

Anonymous said…
Please come visit the High Line to watch all the "race walkers" hurtling down the paths.

I like the New York page, but New Yorkers should learn just a few other speeds!

Teri Tynes said…
I'm totally with you on this one, Anonymous. Especially on the High Line. NYers need to slow it down.
1:36 PM