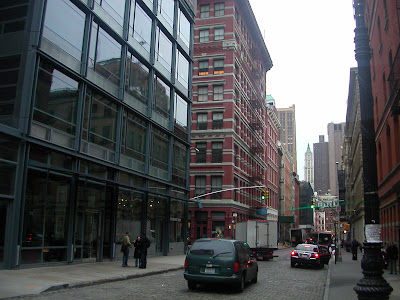 In the image here, a streetscape along Mercer Street in Soho, the dark glassy building on the left is 40 Mercer, a luxury condo development by architect Jean Nouvel completed a few months ago. Yesterday, the prestigious Pritzker Prize (site) announced that Nouvel was the 2008 recipient. Looking south, Cass Gilbert's Woolworth Building, which I wrote about in the previous post, stands off in the distance.

Nouvel, a 62-year-old innovative designer, has several opportunities to add his touches to the physical landscape of New York. The condo above is a modest, though elegant, contribution. What he's planned for midtown is of a different order.

Nicolai Ouroussoff, architecture critic of the NYT, writes that Nouvel's planned 75-story tower next to the Museum of Modern Art "promises to be the most exhilarating addition to the skyline in a generation." (NYT article) The sketch of the proposed tower, Ourousoff notes, takes off from the imaginative 1920s sketches of architect Hugh Ferriss. Early in his career, Ferriss decided to focus on a career rendering the works of others, and after moving to New York in 1912 he went to work for Cass Gilbert. His rendering of the Woolworth Building for Gilbert is considerably lighter in mood than his later signature expressionist and theatrical sketches of the 1920s.

Nouvel, we're all coy to point out, resembles a handsomer though unmistakable Dr. Evil. Fashioning this new tower out of the mythical renderings of the New York skyline of mid-century - from Fritz Lang's Metropolis to DC Comic's Gotham (also Ferriss-influenced), Nouvel presents to New Yorkers a building that looks like its sketches, revealing the criss-cross lines of its construction. We'll be able to see straight through it in places. I'm now fantasizing an image of Nouvel, standing at a window on the 75th floor and looking out at the new Gotham, softly stroking a tiny hairless kitty.

See also Walking Off the Big Apple's 40 Bond to 40 Mercer walk. Image above by WOTBA.