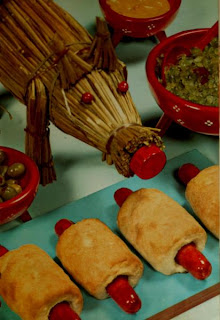 Call it a Trifecta, but the convergence of the multi-state primary day, including New York, this morning's downtown tick

Time to pull out the cookbook. Pigs in a blanket? A little guac? How about a Mardi Gras cake with a little figurine of Eli Manning or Ron Paul hidden inside?

I just discovered the delightful Betty Crocker's Cookbook for boys & girls (1975) at the Internet Archive. For anyone who enjoys the artistry of baking and cooking, I think it's time to put kids back in the kitchen and whip up the magic for the whole family.

I'll be reporting on the exciting events of the day, in addition to items previously scheduled. The only bummer is the weather forecast - ground lightening is forecast for later this morning around the time of the Giants ticker tape parade. Also, Transit Advisory! The Mayor (who sort of runs for President) asks that anyone going to the parade this morning should stay off the 4, 5, and 6 trains, because they're too crowded anyway with regular commuters. So, walk! And wear galoshes.

Images: Pigs in a Blanket from the Betty Crocker's Cookbook for boys & girls (1975). Not in Copyright. See full text at Internet Archive.

A Walk in the Forest Primeval

May 19, 2020
Contemplating the fall of civilizations in Inwood Hill Park At times, it feels like we’re living at the end of civilization. With the arrival of the global pandemic, many governing structures are teetering at a breaking point, one measured in graphs, curves, and waves. Whole systems like mass transit and global trade are fractured as well. Steps leading to a high ridge trail in Inwood Hill Park Most threatened are our social arrangements, the ones in which most of us were socialized. The norms of human interaction are shockingly in tatters these days. Just three months ago, it was normal to hang out with others in person without worrying if being in one another’s presence would cause illness or possibly death. Political and economic structures are teetering, with a critical collapse of what was once known as the public space. A Baltimore Oriole visits a tree near the main entrance of Inwood Hill Park on Seaman Avenue. It’s easy to imagine a swift evacuation of once pr
Read more