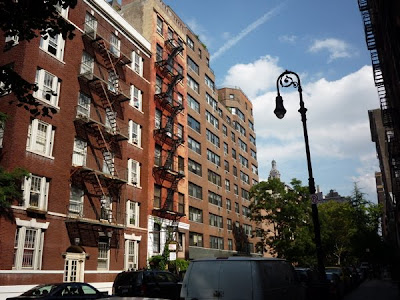 The Tenth Street Studio Building at 51 W. 10th Street was demolished in 1956 to make way for an apartment building. Though not as high profile as the destruction of McKim, Mead, and White's Penn Station, the Greenwich Village building nevertheless held historical importance as the center for artistic life in New York in the 19th century. In 1857, enlightened entrepreneur James Boorman Johnston hired Richard Morris Hunt to design a workspace specifically for artists, some that included living quarters. Finished in early 1858, the three-story building featured studios designed around a communal gallery space. The gallery had a domed skylight at the top, a source of light that would provide the right kind of luminosity for the paintings below.

Many artists associated with the Hudson River School kept their studios in the building, including Frederic Edwin Church, Albert Bierstadt and Martin Johnson Heade. Winslow Homer opened his studio in the building in 1859. John La Farge worked there for 52 years. Later in the century, William Merritt Chase moved into Bierstadt's old studio, ushering in later fashionable European styles (See the interior of his studio here, from the Smithsonian's Archives of American Art.) The proximity of the artists and the discussions among them helped facilitate a vibrant culture of creativity that lasted for decades.

View Greenwich Village Walk: W. 10th Street to the Hudson River and Back in a larger map

The Tenth Street Studio Building slowly lost its prominence as an artistic center during the 20th century. In November 1938 Berenice Abbott photographed the building, an image that's part of the collection of her work at the Museum of the City of New York. You can see it here. The sweeping fashion in the 1950s and 1960s for bright shiny newness took out many buildings of historic and artistic importance, including this one.

In the spirit of the artists of the Hudson River School who worked in the Tenth Street Studio Building, this walk through Greenwich Village leads to the river. While this stretch of the river may not be as mountainous and scenic as the towns and valleys to the north that the artists preferred, there's still the same possibility of finding in the sky and in the clouds, especially during the "golden" hour, a sense of sublimity and awe. Many blocks in the Village maintain a sense of the city's distant past, thanks in large part to the work of Jane Jacobs (1916-2006), the fighter for urban preservation whose former home is along the way. The walk takes in several standards of Greenwich Village walks, beginning with the sublime stretch of West 10th Street between Fifth and Sixth Avenues.

Images by Walking Off the Big Apple, August 2009.