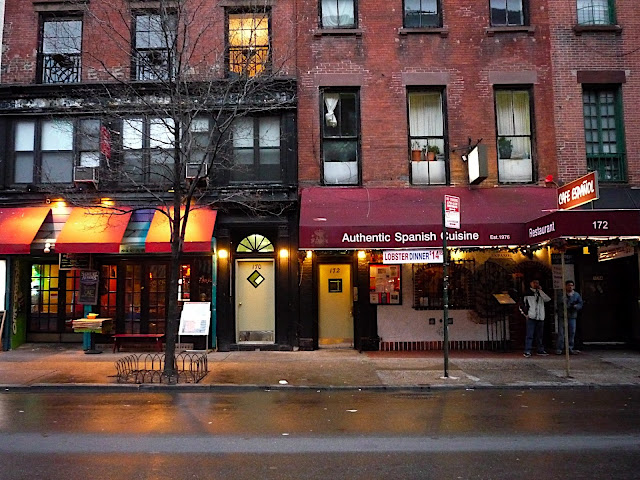 In addition to my more adventurous walks in far-flung parts of New York, I routinely walk the streets in my own neighborhood of Greenwich Village in order to shop, dine, attend a meeting, run an errand, or walk the dogs. Many New Yorkers are accustomed to this sort of walking. I have favorite streets in the neighborhood, among them the well-known Bleecker Street, Sullivan Street (especially south of Houston), and others listed below. As I like to go out for a walk simply as a pastime, a way to get exercise, or as a means to walk off something, I often wander outside the boundaries of the Village. Still, my most favorite streets for strolling can be found below 14th Street, the boundary that separates the Village and the East Village (once considered part of the Lower East Side) from whatever bourgeois life happens to the north of it.

• Bleecker Street, in its entirety (West Village to the Bowery): On the west side, it's now fairly haute. Near 6th Ave., wonderful gourmet shops. In the middle, a mix of cafes and stores, and now one of the city's best new venues with Le Poisson Rouge. Toward the east, a Bowery feel.

• Hester Street (Lower East Side): Many little trees are now shading this once-bustling corner of Jewish life in New York.

• Bond Street (Noho): 40 Bond, to be sure, but also stroll east to 2nd Ave. Bond Street's new life may be linked with the fate of all bonds.

• Orchard St. (Lower East Side): I listed many highlights of this historic street on the Lower East Side. Visit the Tenement Museum to learn more.

• Grand Street, in its entirety (Soho, Chinatown, Lower East Side): One of the best streets for strolling culturally-different neighborhoods.

• MacDougal St. (Village): In my mind, the soulful center of Greenwich Village. Whatever happens here stands in for the rest.

Image: Bleecker Street, near the corner of Sullivan, after a rainfall. Greenwich Village, New York.

Anonymous said…
I'm not commenting much but I'm always reading. Guess why? I bought a pedometer, started walking and got busy ^-^. Thankyou for the inspiration and thank you even more for the daily interesting read!