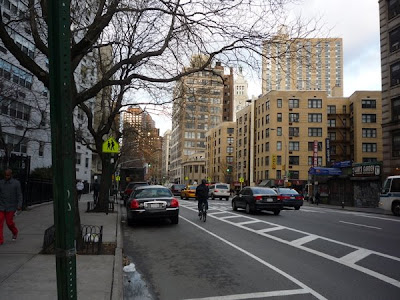 "Fourth Avenue--born and bred in the Bowery--staggers northward full of good resolutions."
- O. Henry, "A Bird of Bagdad"

O. Henry's sentence above about Fourth Avenue should count among his most clever lines. As the Bowery earned a rowdy reputation during the writer's time, his comparison of the meandering stretch of Fourth Avenue to a staggering drunk man returning home is witty and perhaps semi-autobiographical. After carousing in the Bowery, Fourth Avenue would seem the most obvious way to stagger north toward Irving Place, O. Henry's own bustling street, walking off the night's indulgence, "full of good resolutions."

As O. Henry notes in his story "A Bird of Bagdad," Fourth Avenue seems a poor little relative of its lively parallel streets. "The high-born sister boulevard to the west" refers to Broadway, and "its roaring, polyglot, broad-waisted cousin to the east" could refer to Irving Place, but most likely Third Avenue. North of Union Square, Fourth Avenue was later renamed Park Avenue South.

When I find myself walking along Fourth Avenue, like the other day when I was walking back home from Irving Place, I often feel sorry for the avenue. So, it was nice to come across O. Henry's thoughts, because he felt the same way.

New York Songlines has a spiffy page on 4th Avenue.

Image of Fourth Avenue by Walking Off the Big Apple.