Beating the True Path to Greenwich Village (from Fifth Avenue)

December 02, 2008
Where there's a will there's a way. When extensive renovations to the fountain area and the northwest quadrant of Washington Square Park commenced last year, people who regularly walked between lower Fifth Avenue and the Village south of the park found themselves in a predicament. Normally, the fountain area itself is the means by which to efficiently move between these two neighborhoods of Greenwich Village (different worlds really), but with a fence constructed around the fountain, walkers were forced to use a path near the eastern perimeter of the park to make the journey. It was out of the way and a hassle. It seemed unnatural and unfair to interrupt this small, familiar routine. 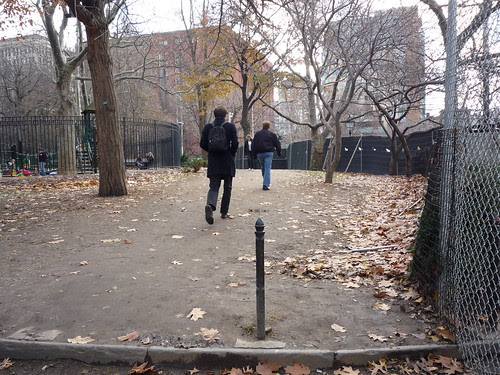 As the days turned into weeks and months, enterprising sojourners with an eye for a straight line began to beat a more efficient path between Fifth Avenue and the area south of the park. The path took shape between the Washington Square Arch and the playground, just next to the temporary fence. A line of park benches on the south end functioned as a barrier of sorts but could not forestall the people who simply walked over or squeezed between them or found access through a gate near the playground. Now, the path looks shiny, it's so beaten. I find it pleasantly subversive to take this path when I want to walk up lower Fifth Avenue - a bit of a Situationist dérive in the heart of Greenwich Village.

When the current stage of Washington Square Park's multiphase renovation wraps up, with its storm of controversies, and a new phase begins, I wonder what will become of this people's trail.

Image by Walking Off the Big Apple, December 1, 2008. Washington Square Park. More images of the path on Flickr WOTBA.