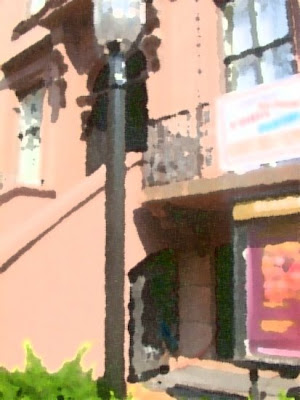 Observation: My generation is over-medicated, while the younger ones are over-mediated.

For those following the John Edwards affair, I plan to visit the Regency Hotel (540 Park), the place where it all began, and report back. Hotel Chatter is on top of the hotel angle. Most speculate that the action took place in The Library.

A few days ago I walked up the lower part of Fifth Avenue and decided to stop into the Salmagundi Art Club at 47 Fifth Avenue. An historic art club founded in the 19th century by people who loved to sketch, the place, from all appearances, is still going strong. I saw their current exhibitions and was delighted to see people still making art for the sheer thrill of it. Everywhere I've lived I've seen similar art clubs , and I'm reminded that while fashions in contemporary art come and go, many still prefer traditional landscapes and still-lifes, the smell of oil paint, and the pleasures of exhibiting one's work in the company of friends. Not all clubs, however, possess a drop-dead gorgeous Old New York space on Fifth Avenue, complete with parlors, expansive galleries, a dining hall, and a tavern. The gallery is open seven days a week from 1 to 5 p.m. for the general public. Art classes are open to the public also. See their website.

As it's getting close to the start of school, it's time to resurrect the Back-to-School Art Supplies Walk.

Brett Favre, former Packers quarterback and native of Mississippi, plays in a pre-season game as a New York Jet tonight. For some native New Yorkers, southern accents are hard to understand. I will be happy to translate anything Favre says in a post-game press conference. However, if you think the Mississippi football star's accent is hard to understand, try listening to William Faulkner.

Image: Entrance to the Salmagundi Art Club, 47 Fifth Avenue. New York. So, I cheated- I WAS going to paint the entrance, but I got lazy and photoshopped a digital image. I will try to do better next time.

Coping with Anxiety and Crisis: A Selected List of Fine Chocolate Stores in New York

November 07, 2008
Fears of recession, concerns about the state of the world, worries about job prospects, and anxieties about the future dominate the news headlines these days, but these kinds of stories are perennial, coloring the way we conduct our lives. Fortunately, we now believe that the 400+ ingredients in dark chocolate may alleviate some of the worst symptoms of this kind of external stress. Had a bad day? A little brisk walk to your local chocolate boutique may fix you right up. It's funny, but studies show that taking a chocolate supplement doesn't work as well for a sense of individual well-being as the act of eating a piece of chocolate. I understand. I think aesthetics matter. Eating beautiful chocolates can make you feel all yummy and special on the inside. My chocolate cravings can even be satisfied by unravelling the classic and minimalist Hershey's bar. Yet, I still prefer a visit to the city's finest purveyors of chocolate. At the following places (links provided), c
12 comments
Read more