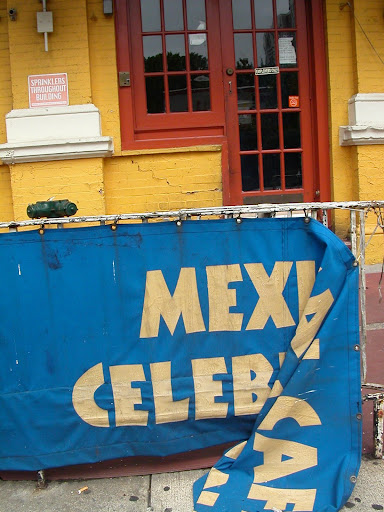 I'm feeling the old boho neighborhood half empty rather than half full this weekend. The Fourth of July holiday seemed quieter than usual, and I know that the main reason for the empty streets, aside from the tens of thousands that departed the city last Thursday via the Holland Tunnel, was the steamy humidity and persistent overcast skies. It always looked like it was going to rain even when it didn't.

Or, maybe I'm down because I've been reading too much Plath. Or maybe because I just watched seven hours of tennis, plus rain delays.

But, when I got out and about this morning, even before all the televised tennis and the sweat of the Federer-Nadal match, I saw a significant number of shuttered businesses along the neighborhood streets. These restaurants and shops weren't just closed for Sunday or the holiday weekend, but they were closed for good. Seeing them out of business makes me sad that there's no one to liven up the street corner here and there.

I often liked walking by Señor Swanky's on Bleecker and LaGuardia Place and seeing people feast on large platters of Mexican food and drinking margaritas even when I did not partake. Same with Cafe Figaro at the corner of Bleecker and MacDougal. Along W. 3rd St. I was surprised, and indeed sad, to see the vacated spot for Heavenly Delights candy store, because where else will I get the blue jelly bean fix that I wanted to acquire? The cool framing shop on LaGuardia is closed, too, and several other places that I can't even remember now. Lots of signs are gone, replaced with "Store for Rent."

Has the larger economic downturn hit downtown? Actually the West Village, the area west of 6th Avenue, looks healthy enough, and the South Village below Houston looks OK, but these streets along LaGuardia, Thompson, Sullivan, and MacDougal north of Houston are showing some definite signs of funk. The fact that so much of nearby Washington Square Park is shuttered for renovations may be a factor also. This is my neighborhood, so I take it personally.

But, coming soon, happier news to report from an otherwise gastronomical 4th of July.

More depressing pictures from my lonely stroll on Flickr WOTBA.