Central Park: Mapping Catch-and-Release Blogging on Day 4 in the Park 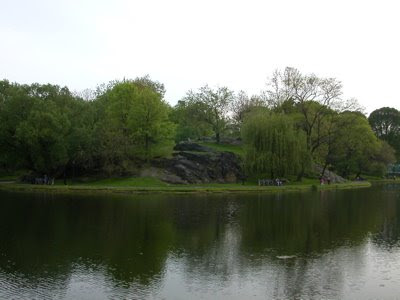 I'm still marveling that it's possible to fish and blog at the same time at the Harlem Meer on the far northeast corner of Central Park. But that's not the only thing I observed on my fourth and final day of Central Park excursions this week. The northern part of the park features some of those walk-about vistas that transport the strolling spectator into the regions of the sublime landscape. There's method in the landscape architecture. This section of the park, at least when I visited yesterday, seemed far away from the visitor-heavy areas farther south and more a place for the surrounding neighbors. That makes sense, because I don't think many tourists come to New York to fish.

As the map shows, I only walked through a limited area of the northern quadrant, and so I'm looking forward to visiting again, especially the Conservatory Garden along the east side of the park. Still, I liked sitting on the edge of the Harlem Meer and being able to look up from my laptop at this picture-perfect landscape, the window into nature, as images like these were once called.

More observations about catch-and-release blogging coming in future posts, along with highlights from my week "working" in Central Park.