Tribeca Living: A Building for Chocolate and One for the Wool Trade 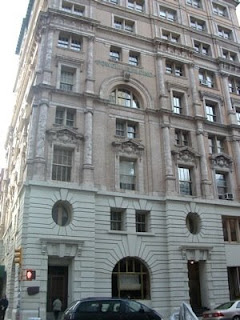 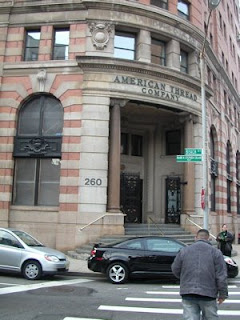 The Powell Building (1892) at 105 Hudson Street (at Franklin St.), shown on the left, was designed by Carrere & Hastings, the architects of the New York Public Library at Fifth Avenue and 42nd Street and the Frick mansion, among other others. In 1890, Henry L. Pierce, the head of a chocolate company in Massachusetts, wanted a nice building for his company, a step up from the plain vanilla of industrial architecture. Hence, this elegant Beaux Arts-style building.

After Pierce died his estate sold the building to candy manufacturer Alexander Powell who, in turn, hired his architect to enlarge the building and add stories. In the 1970s the building's higher floors were converted into residences. The Japanese restaurant Nobu (restaurant website) is on the first floor, in the same place that Powell once displayed his chocolates.

The Renaissance revival building at 260 West Broadway (at Beach St.), its curved entrance shown on the right, was built as the New York Wool Exchange in 1894-96. The wilier wool traders of New York hoped to trump the wool traders of Boston with such an edifice, but the scheme never worked. In 1907 the American Thread Company took over the building, and since the 1920s it's been known by that name. Now, not surprisingly, the building is operated as a condominium.

For those in search of chocolate and were disappointed reading this post, please see Wee Willy WOTBA's Downtown Chocolate Walk, for chocolate locations north of Tribeca.