Monday Morning Quarterbacking, and The Flâneuse of Death 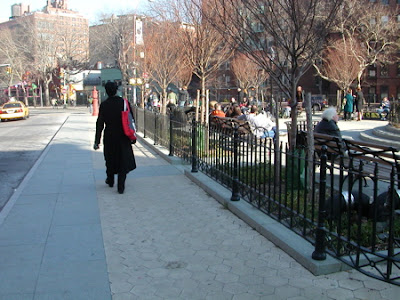 As I write this post on Monday morning, I see a mixture of large snowflakes and blowing rain coming down hard outside the window. What a contrast from yesterday's bounteous warm sunshine! At least the nasty weather held back until the end of last night's revelries. You may have heard that the NFL home team here, the New York Giants, staged an improbable underdog victory over the New England Patriots in the final minutes of the Super Bowl, and as soon as the game ended, excited fans poured out of the bars and into the streets. I enjoyed falling asleep last night to the noise of so many people whooping and hollering.

Yesterday, as I roamed the West Village, I took several pictures of places and people, more of which I'll share in upcoming posts. I remember taking the image of the woman in the black coat walking past Father Demo Square, the recently renovated space near 6th Avenue, Bleecker and Carmine Streets (and Our Lady of Pompei Church where Father Demo served as pastor). Looking at the photo now, I think she looks ominous in her darkness, a contrast to the bright dispositions of the people sitting in the square. She's the one that puts the kibosh on celebrating in the streets and the one who whips up bad weather for Monday mornings. She is The Flâneuse of Death.