Lost in the West Village? So Eat 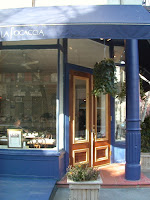 Last week I walked down E. 4th Street and noticed that the color red dominated the visual landscape. Walking on W. 4th the palette veers to the blues, greens, and teals. The cool colors dominate on the west, while the hot colors splash on the eastern blocks of 4th Street. I attribute this visual duality in large part to the cultural history of the two areas - the West Village is more Western European while the East Village blends southern European with Latin American cultural heritage.

The West Village is often confusing and disorienting, because the streets run off grid. I spend a lot of time helping lost souls regain their bearing, and sometimes I'm lost myself. Last week a woman approached me near the intersection of Bleecker and Thompson and asked me how to get to Washington and Perry. She actually looked lost, with that glassy-eyed averted glance of trying to understand the mysteries of space and time. I had to go into a trance to be able to help her.

I attribute the success of the West Village restaurant scene to the trap that the denizens set for the lost souls wandering in the neighborhood. My own personal compass is informed by the knowledge that Bleecker Street and the parallel W. 4th take tricky turns toward the north beginning at 6th Avenue. That's really all I need to know. Walking north on Bleecker after 6th Avenue, for example, I know that turning left will take me further west.

I've started to compile a list of restaurants and cafes in the West Village for anyone who is interested in veering into such a trickster neighborhood and has some patience with getting lost.

Another way I orient myself in the West Village is to take my big dog with me. She loves the Hudson River pier so much that she will drag me there.