Sick in Bed and Reading About Walking 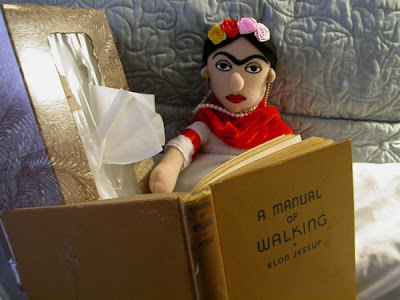 Maybe I over-exerted myself in the East Village yesterday, bringing on what appears to be a common cold, or maybe it was Saturday's stroll up Fifth Avenue. Whatever it was, I am down for the count. The winds over the last few days have not helped, nor the dry indoor conditions that send blue sparks flying even on the lightest touch. I thought my dogs and I were going to electrocute one another.

I've taken to private chambers today (if you like the duvet cover, I wrote about it in an October post), curling up with my walking books. Here I am with Jessup's A Manual of Walking (1936). Right now I'm reading the final chapter titled "Walking With Burdens." Jessup argues that the inhabitants of modern Western civilization do not often walk correctly, because they're forever carrying bags and packages in their hands. Jessup makes a case for the head:

"Head-carrying is really a more rational affair than hand-carrying, although to be an expert you need to have done it for several generations. It is a custom that will probably never get very far in Western countries, none the less, some of its virtues are worth pointing out. The strength in the head is far greater than generally realized, and under it you have the full support of the body, the burden being perfectly centered."

Jessup goes on to suggest that most Westerners, because they're incapable of carrying shopping bags on their heads, should carry burdens on their backs, in the form of a backpack. The illustrations for properly packing a backpack that accompany the discussion are hilarious, and I will show them to you once I regain my strength to scan.