More Walking Books: "I am, a stride at a time." 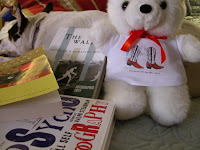 "Stephen closed his eyes to hear his boots crush crackling wrack and shells. You are walking through it howsomever. I am, a stride at a time. A very short space of time through very short times of space. Five, six: the nacheinander. Exactly: and that is the ineluctable modality of the audible. Open your eyes."- James Joyce, Ulysses

When I find myself explaining that Walking Off the Big Apple is often more about the idea of walking than a practical handbook of walks (though I hope there's plenty of those here, too), someone usually recommends a book about walking. High on many lists is Rebecca Solnit's Wanderlust: A History of Walking, a meditation on the intersections of walking with culture, history, and politics. Others may mention an older New York walking book such as Helene Hanff's Apple of My Eye or Helen Worden's Round Manhattan's Rim.

An ordinary novel, or an extraordinary one such as James Joyce's Ulysses, can often be read as a book about walking. Leopold Bloom's walk around Dublin explores the perambulator-as-protagonist in a literal geographical way but also as an internal map of the psyche. The same could be said for Virginia Woolf's Mrs. Dalloway. I've been reading Edith Wharton's The House of Mirth for the relationship of walking to social class. As Wharton's hero, Lily Bart, starts to stumble and fall through her social status, the more she takes to walking the street.

I'm enjoying a new book of essays, Psychogeography: Disentangling the Modern Conundrum of Psyche and Place, by Will Self, with illustrations by Ralph Steadman. Self packs his jaunty globetrotting essays with humor, zaniness (who else would decide to walk from JFK into Manhattan?) and a keen sense of the physical demands of walking.

Image: PRODUCT PLACEMENT ALERT! The terrier in the background is not for sale, but anyone can buy their very own WOTBA bear at the Walking Off the Big Apple Emporium. Perfect to give to yourself for Valentine's Day.