The Bears of New York City 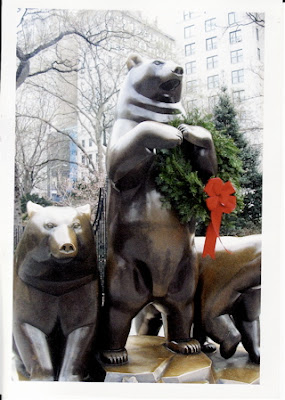 • A Dancing Bear statue is near the Zoo.

• "The Bear Dance," a satirical painting by William Holbrook Beard (1825-1900) on a poster for the New-York Historical Society, is popular with young people. The painting is also known as "The Bears of Wall Street Celebrating a Drop in the Market."

• For more on this bearish subject visit the office of Bear Stearns at 383 Madison Avenue, or better yet, see Walking Off the Wall Street Bears on this website.

• Dancing bears, a street act in which real captured bears are made to perform, is a cruel tradition and should be universally condemned.

• The bears in the American Museum of Natural History include the Alaska brown bear, grizzly bear and polar bear dioramas.

• "Group of Bears" (1932, cast 1963), a statue on the south side of the Metropolitan Museum of Art, is by American modernist sculptor Paul Manship. (picture)

• The Art Bears inside The Met include Leonardo da Vinci's "A Bear Walking" and a Roman vessel in the shape of a bear made 200-400 AD. I'm sure there are more bears in there.

• The name Arctic is derived from the Greek word meaning "bear." Antarctica means the polar opposite.

Image by Walking Off the Big Apple.