The Bowery 2007 Walk: Crying in Public 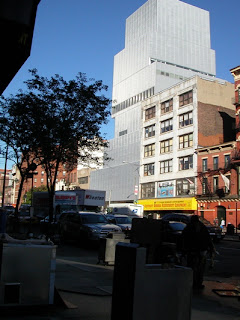 More on my advocacy of The Bowery as the designated Melancholy District:

Ah me I busted out
Don't even ask me how
I went to get some help
I walked by a Guernsey cow
Who directed me down
To the Bowery slums
Where people carried signs around
Saying, "Ban the bums"
I jumped right into line
Sayin', "I hope that I'm not late"
When I realized I hadn't eaten
For five days straight
-from Bob Dylan's 115th Dream, Bringing It All Back Home, 1965
Johnny Ryall is the bum on my stoop
I gave him fifty cents to buy some soup
He knows the time with the fresh Gucci watch
He's even more over than the mayor Ed Koch
Washing windows on the Bowery at a quarter to four
'Cause he ain't gonna' work on Maggie's farm no more

-from Beastie Boys' Johnny Ryall, Paul's Boutique, 1989
With a metropolis so large as New York City, it's not unusual to witness strangers crying in public. While I was working on the Upper East Side last year, I cried a few times myself as I was walking down the street. On one of these occasions I passed a woman who had just left her place of employment, and she was crying, too.

Most often public grieving manifests itself in the form of a twenty-something crying and pleading on a cell phone to someone I cannot see. I also overhear people on the verge of tears apologizing on the phone to their immediate supervisor. Then, after hanging up, the flood gates open.

See, wouldn't it be great if all the sad people just headed to The Bowery on these bad days? The temporarily saddened could wallow in the misery of others. Retail stores that market to these needs would flourish - chocolate stores, shoe boutiques, saki bars, and Pinkberry. But we shouldn't depend on consumer habits to handle our melancholy needs. Maybe if people knew that they could freely walk up and down the Bowery and cry in public, then that would be enough.

Images: The New Museum of Contemporary Art, scheduled to open December 2007, a restaurant supply store, the Bowery Mission, and in the foreground a pressure cooker on the sidewalk. All of New York is a pressure cooker.