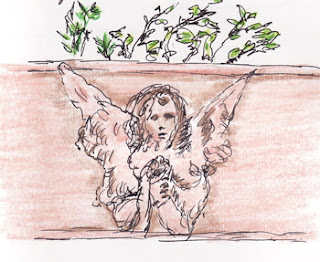 Esteemed 20th century poet W.H. Auden (1907-1973) lived at One Montague Terrace in Brooklyn Heights for a brief time circa 1939-1940. He began his longish poem "New Year Letter" at this address, and it was around this time, perhaps due to the quiet of his street, that Auden returned to his Anglican ways.

In the summer of 1940, George Davis, the literary editor of Harper's Bazaar, persuaded Auden and Auden's lover Chester Kallman to move in with him at nearby 7 Middagh Street. George also invited southern writer Carson McCullers, composer Benjamin Britten and his boyfriend to join their merry crew. As described in memoirs, it was not unusual to see George at the piano butt nekid and Carson on the floor with a bottle of sherry. This was a problem for Auden who was trying to become churchy again, never mind the boyfriend issue. Carson soon had a new roommate, too - one Gypsy Rose Lee. As too much fun was had by all, Carson went back to Georgia to dry out, Gypsy moved to Chicago to save money, but Paul and Jane Bowles were happy to take over their rooms. Then the war came.

The house was torn down eventually to make room for the Brooklyn-Queens Expressway. Auden fans still can gaze at One Montague Terrace.

Image: Detail of the terracotta planter above the door at One Montague Terrace.