On Sixth Avenue and W. 53rd St, the Corner of Venus de Milo and the Halal Guys

November 30, 2015
At the corner of Sixth Avenue and W. 53rd St in Midtown Manhattan, the Halal Guys dish out gyros, sandwiches, and platters to a steady line of patrons. They have two carts set up on either side of the street. Their chicken sandwich, a pita brimming with shredded chicken, lettuce, and signature white sauce, is completely delicious at $5. Many pricier lunches can be found in the neighborhood but few are as satisfying on a bright chilly afternoon. 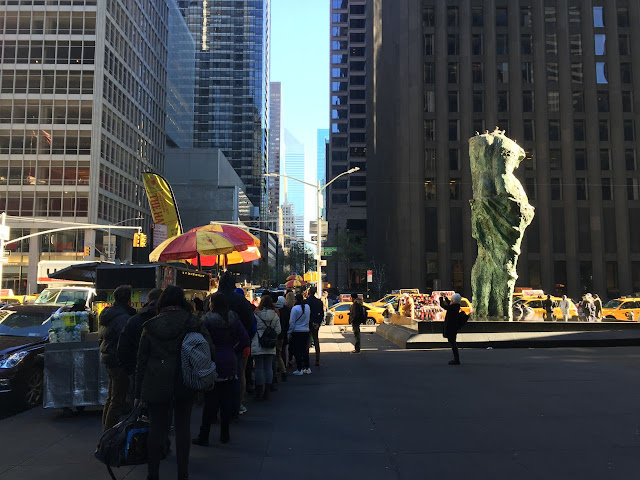 But where to sit down and eat? A plastic fork is provided. Many choose to perch on the rim of the small fountains in front of the Crédit Agricole building on the west side of Sixth Avenue. These fountains are graced with artist Jim Dine's 1989 set of female torsos, variations on the Venus de Milo. Titled "Looking Toward the Avenue," the headless figures bring an elegant bit of color and curved lines to an otherwise monotonous steely grey canyon. 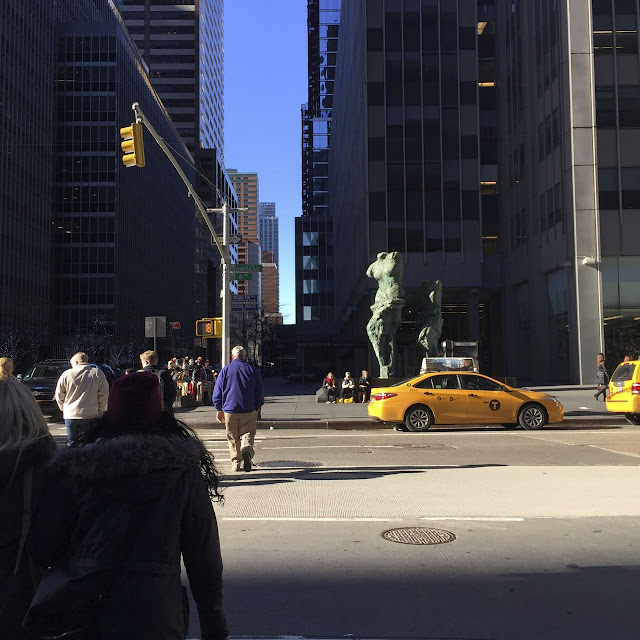 Several attractions are near the intersection, including The Museum of Modern Art (MoMA) and Radio City Music Hall. 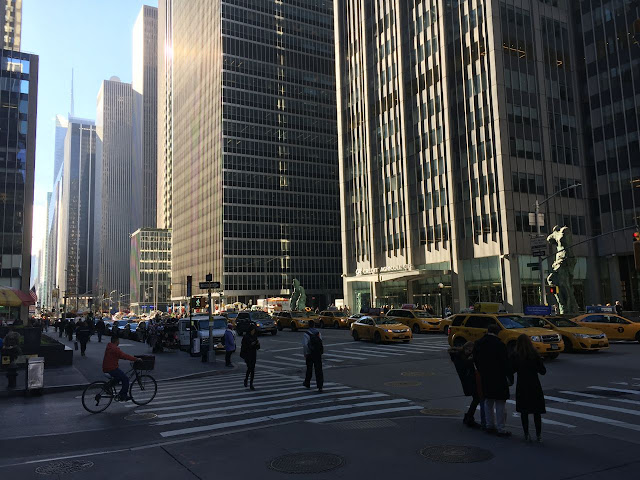 One more thing. Watch out for the hot sauce. It is really hot.

For a long stretch of the legs, consider walking the whole of Sixth Avenue, approximately 3.64 miles.

Excerpt:
"Without the humanizing art and the sleek, comforting public fountains out front, the imposing corporate presence of 1251 Avenue of the Americas (known also as the Exxon Building, though the oil giant took its headquarters to Texas in 1989) and its giant corporate siblings, technically part of Rockefeller Center, would constitute a dystopian future. As a grouping, the slabs come across like a giant piece of op-art. Fans of architecture should also note the CBS Building, a black mammoth designed by Eero Saarinen & Associates in 1965."

Images by Walking Off the Big Apple from Sunday, November 29, 2015.