December 04, 2012
Franklin D. Roosevelt Four Freedoms Park, located at the south tip of Roosevelt Island, officially opened to the public on October 24, 2012, just a few days before the city was hit by Hurricane Sandy. What follows are pictures and thoughts from a visit to the park on the afternoon of Sunday, December 2, 2012.

The story of the park is long, but in short, architect Louis Kahn designed plans for this monument in the months before his death in 1974. After decades of unrealized plans and lack of financing, momentum to build Kahn's FDR memorial picked up a few years ago. Residents of Roosevelt Island were divided on whether or not this was a good idea. At the time, this site was a rare thing - a small, verdant patch of undeveloped land, a remnant of a primordial Mannahatta. Building on a green space in New York City with uncommon views of the surroundings was a tough decision. Especially if the thing in question was a big deal with many question marks. 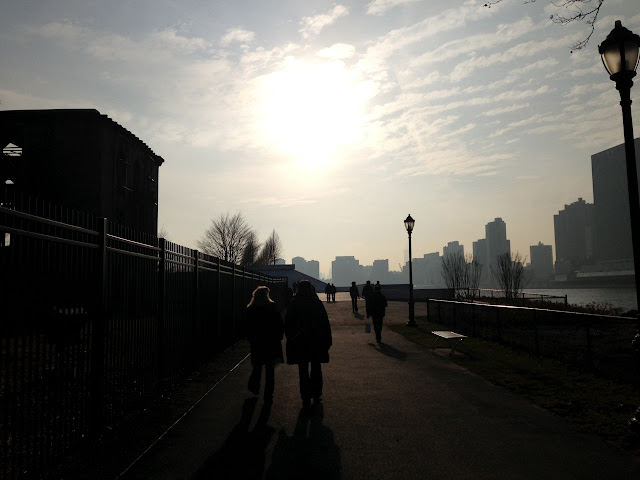 Park hours are Thursday – Sunday, 9 am – 5 pm. www.fdrfourfreedomspark.org
Recommended transportation: The Roosevelt Island Tramway, the aerial tram that connects Manhattan and Roosevelt Island, offers sweeping views of the island, the East River, and the park.

Though sited on a vulnerable island in the East River, Franklin D. Roosevelt Four Freedoms Park was undamaged during Hurricane Sandy.

Images by Walking Off the Big Apple from Sunday afternoon, December 2, 2012.


Pandemic Posts from the Pause: New York City in the Age of Coronavirus