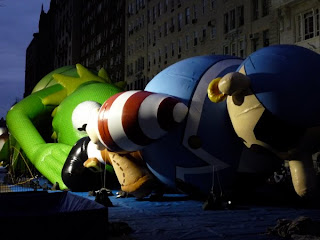 Following last year, the 84th Macy's Thanksgiving Day Parade on Thursday, November 25, 2010 will be following a new route through Manhattan. A major reason for the change has to do with the city's recent experiments along Broadway to make the thoroughfare more engaging for pedestrians and bicyclists. The installation of planters and seating fixtures prove to be an impediment for marching bands, entertainers on floats, an army of clowns, inflatable dogs, and ultimately Santa himself, so another route is necessary. As we're getting to know the new path down Seventh Avenue, I thought it would be helpful to take a look at some of the famous buildings and businesses along the way. The first section along Central Park West should be familiar to parade-goers, but new sights will come into view along Seventh and Sixth Avenues - for example, Carnegie Hall and the Carnegie Deli, to name a couple of beloved New York institutions. Old and new buildings of varying architectural distinction line the avenues, from the great apartments buildings such the Dakota and San Remo to Art Deco and contemporary office buildings.

Click the map to enlarge for detailed placemarks and brief descriptions. Switching over to Street View would provide a simulation of the experience.

One good place to view the parade: On a couch watching the television (NBC). Parade begins at 9 a.m. ET

Image by Walking Off the Big Apple from 2008 from the night before Thanksgiving.