Walking the Street, and the Rhythms of New York City 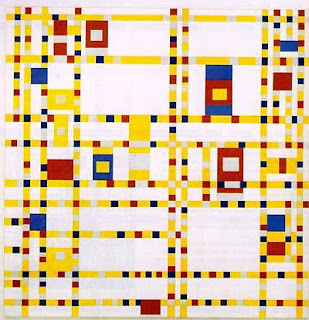 Dutch artist Piet Mondrian spent the last four years of his life in New York City, and several of his last paintings, like Broadway Boogie Woogie (1942-1943) (inset), respond to the frenetic pace of the city and its danceable sounds. Boogie-woogie, a piano-centric twelve-bar blues form, migrated from Southern honky-tonks to 57th Street's Carnegie Hall in the late 1930s, when a series of concerts introduced a range of musical styles to the big city. The music still matches the pace of Broadway, the city's great avenue that boogies down a great swath of Manhattan.

The ambient sounds of the city inspired John Cage, a non-traditional composer, to compose 49 Waltzes for the Five Boroughs, an ode consisting of simultaneous "happenings" across the vast metropolis - from a cobblestone street in the West Village to the Long Island Expressway. The choreography of the streets can be found in Leonard Bernstein's On the Town and West Side Story, in John Kander and Fred Ebb's song "New York, New York," the city's anthem, in Rent and In the Heights, in "Living for the City" by Stevie Wonder and in "Livin' La Vida Loca" by Ricky Martin. The ambient sounds of the city have inspired a few more songs as well.

Most everyone thinks that New York is a fast-moving city, but the 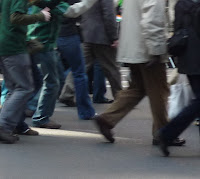 diverse neighborhoods within the boroughs imply a variety of rhythms. Midtown, with densely-concentrated high-rise office buildings, shows off the fastest tempo. Greenwich Village, with its winding streets, small shops and outdoor cafes, prefers a slower jazz rhythm or the plaintiff blues-folk of the late, great Odetta.

People, too, have their own rhythms - in moving, talking, sleeping, walking, even in sleepwalking. For example, I most often feel like a waltz, with one down beat and two upbeats. Knowing your personal repertory of beats is an important form of self-awareness and a way to understand the role you play in the city symphony.

I love Brenda Russell's way of walking in her video for "Walking in New York." Let's have a look at that now, shall we?