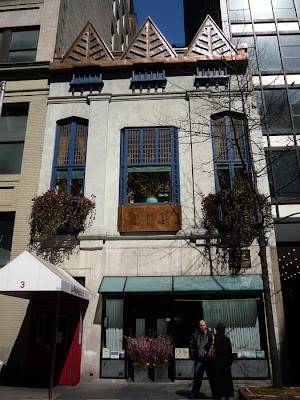 Like many others, I learned French in school by reading Le Petit Prince, the charming and thoughtful story written and illustrated by Antoine de Saint-Exupéry. So I was delighted, even in a child-like way, to come upon a charmer of a building, 3 East 52nd Street, and to see on the exterior a plaque honoring the French author and aviator.

According to Christopher Gray, in an April 2001 NYT Streetscapes article about the building, the organization La Section Americaine du Souvenir Francais put up this plaque memorializing Saint-Exupery. It's not where he lived, as I shall explain. 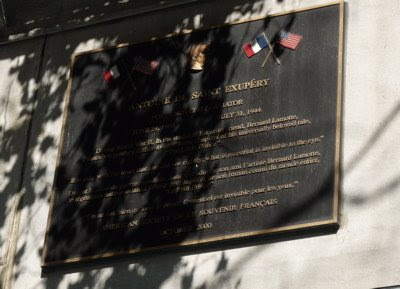 During the early years of WWII, from January 1941 and April 1943, the writer lived much of the time in a penthouse at 240 Central Park South and in a rented mansion in the village of Asharoken on the north shore of Long Island. He also spent some time in Quebec City. He wrote The Little Prince in the Long Island mansion during the summer and fall of 1942. In 1943 Saint-Exupery left New York for Europe where he joined the Free French Forces as a pilot. On July 31, 1944 his plane went down, and he was not seen again. (The Wikipedia article on Saint-Exupery presents fascinating material on the many efforts to account for what happened on his last flight.)

In his article for the Times, Gray reported that the commemoration group that put the plaque on E. 52nd St. tried originally to place it on the front of 240 Central Park South, but the owners refused, worried that it would draw crowds. So why 3 E. 52nd Street? Well, this is a place where Saint-Exupéry liked to hang out, spending time with his friend, the painter Bernard Lamotte. In 1942 the first floor housed the French restaurant, La Vie Parisienne (now La Grenouille), and Lamotte used the top floors for a studio. With the fall of France, 3 E. 52nd became a favorite gathering spot for an artistic circle of friends.

The charming building is best viewed from the Olympic Tower and its arcade that connects E. 51st Street to E. 52nd St. With its unusual steep dormers, blue trim, and over-flowing window boxes, the house seemed a perfect place for French charm in Midtown.

Anonymous said…
wow I never knew he had writen that one on Long Island... thanks so much :)
2:57 PM

Teri Tynes said…
Yes, this surprised me as well. I love his books but didn't know about his New York years. What a cute place.
5:03 PM

Loved this post. It reveals the history behind the plaque. I can imagine hanging out there just like Saint-Exupery.