A Walk for a New York Christmas: Part I. Clement Clarke Moore's Chelsea 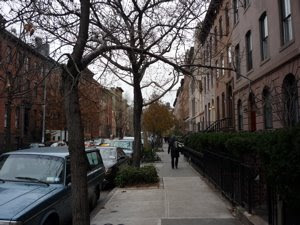 In 1822, wealthy New York scholar and poet Clement Clarke Moore (1779-1863), a resident of the Chelsea neighborhood, wrote the famous Christmas poem, "A Visit From St. Nicholas," known widely as "Twas the Night Before Christmas." The poem first appeared in a Troy, New York newspaper in 1823 with "anonymous" listed as the author, and Moore acknowledged authorship in 1844 after the poem became a standard. Some scholars suggest he appropriated a poem authored by Major Henry Livingston, Jr. (1748-1828) and turned it into the most famous Christmas poem of all time. 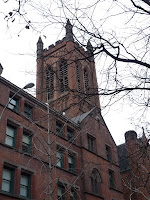 Clement Clarke Moore Park, located at 10th Avenue and 22nd Street, was once the Clarke family estate. The house, located at what is now Eighth Avenue and West 23rd, was called "Chelsea," named for a old soldier's hospital in London. "Chelsea," as we know, became the name for the surrounding neighborhood. At the time he wrote "A Visit From St. Nicholas," Clement Moore was a Professor at the General Theological Seminary of the Protestant Episcopal Church. He had donated the family land for use as a seminary, and the still-thriving seminary stands today along Ninth Avenue between 20th and 21st Streets.

Exploring this area of Chelsea offers a chance for some peace and quiet, a welcome respite from the frenzy of midtown during the holidays. With the emergence of the important gallery district to the west, the older townhouses along these streets have been restored and well-maintained. Be sure to ask to see the gardens at the General Theological Seminary, and stop to admire St. Peter's Church on W. 20th nearby. The German Evangelist Lutheran St. Paul's church on W. 22nd. is also worth noting.

Choices for informal dining include the Moonstruck Diner, the Empire Diner, and a couple of French-style cafés (all noted on the map - enlarge to see specifics).

This special themed Christmas Walk will continue to Irving Place for a celebration of O. Henry. See previous post for the introduction. Or continue the walk to Part II.

Anonymous said…
This is wonderful. Thank You! I have visited NYC for Christmas several times, but never this trail!
7:32 PM

Teri Tynes said…
You are welcome, Carol. I've really enjoyed exploring New York Christmas trails. I think walking through this part of Chelsea is a lovely way to celebrate the holiday.
8:21 PM

January 07, 2008
• Read the more recent comprehensive post, From Penn Station to New York Landmarks: Measuring Walking Distance and Time in Manhattan . View Larger Map Walking 20 blocks uptown or downtown in Manhattan is equivalent to one mile. An example then would be that a walk up 5th Ave. from 8th Street to 28th St. would be a mile and from 8th St. to 48th Street would be two miles. This comes in handy when assessing distances. A fast walk is a 15-minute mile, so if every single crosswalk light is in one's favor, then a walk from 8th St. to 48th. should take 30 minutes. It usually takes me closer to 40-45 minutes. Rational measurement does not work for most of lower Manhattan. This is especially true for the West Village, a bohemian labyrinth. I have seen visitors, drunk on sugary cupcake frosting, walking the wrong direction on Bleecker Street. I just let them walk off their cupcakes.
Post a Comment
Read more