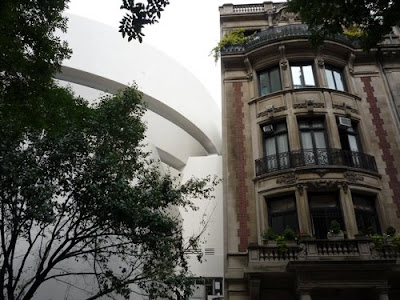 Let's have a look at some of the museums open Mondays -

Any of these museums could be paired with a nearby restaurant or bar, making a complete full afternoon or day in New York. Monday is especially good for a museum visit, because the crowds tend to be thinner, and restaurants, too, tend to be less busy than on a weekend.

A fun museum and bistro walk on the Upper West Side would be a combination of the American Museum of Natural History and the nearby Cafe Lalo on W. 83rd St. I also would suggest a pairing of the Neue Galerie with a nearby cafe, but the two cafes inside the musuem are so good, why go anywhere else?

Image above: The Guggenheim on left and Beaux-Arts townhouse on right. View from E. 88th St. by Walking Off the Big Apple.