The New York Pumpkin and Jack-o'-lantern Patch: Some Smashing Links 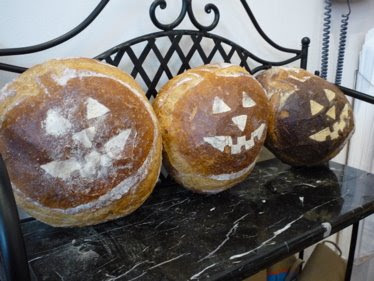 Cleverly-carved Jack-o'-lanterns will soon be taking their places in many New York windows over the next week. Large field pumpkins make great decorations such as Jack-o'-lanterns, but many professional cooks think they're too stringy for making most pumpkin recipes at home. Smaller sugar pie pumpkins are tastier, and a 4-pound pumpkin will yield enough puree for the traditional pie. I've tried to cook fresh pumpkin in the past, with mixed results. I mainly like looking at the varieties of these beautiful but often comical-looking squashes. And if the folkloric purpose of the Jack-o'-lantern is to ward off evil spirits and demons, we may need a few more this year.

What follows is a list of pumpkin-related links that caught my eye. The most eye-catching pumpkins that I found on my walk through the Village yesterday were the Jack-o'-lantern breads featured at Amy's Bread on Bleecker Street (picture). Also, be on the lookout at this time of year for New York pumpkin cheesecakes, pumpkin gelato, and even pumpkin ale. 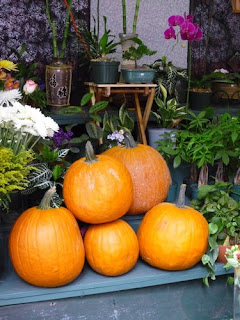 • Animals love playing with pumpkins. Boo at the Zoo (Bronx Zoo; Central Park Zoo) features the delightful interplay of animals and squash. At the Bronz Zoo website, watch the cute video of the lace monitor sticking its head in a pumpkin. Adorable! See the Wildlife Conservation Society website for more.

An often unforeseen dilemma in shopping for a nice big pumpkin in New York City is the realization that you may have to hail a cab in order to bring it home.

Images: Pumpkin-faced loaves of bread at Amy's Bread, Bleecker St. With big thanks to the Amy's staff member who propped them up so I could take this picture.; Pumpkins for sale, florist, Bleecker & Sullivan Streets.