Walking News Digest: Brooklyn IKEA to Include Esplanade, Tribeca Section of Hudson River Park to Open in July, and Why the Swiss Are Svelte 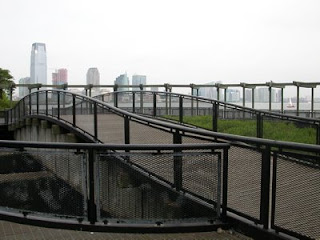 • A new Brooklyn IKEA store, 1 Beard Street in Red Hook, will open at 9 a.m. June 18. What caught my eye in the New York Times story about the new IKEA is the store's planned 6.5 acre waterfront esplanade with wonderful views of the Statue of Liberty and the Manhattan skyline. Fashionable strolling awaits. Another lovely feature is a free water taxi to the store from Pier 11 that runs 40 minutes daily from 10 a.m. to 8:20 p.m. More about the planned esplanade itself in the Brooklyn Daily Eagle.

• New York City's health commissioner wants New Yorkers to walk more vertically by taking stairs whenever possible. Why? New Yorkers are getting fat. Maybe it's because a million New Yorkers are also trying to quit smoking. See NYT The Stairs Were Made for Walking.

• From The Canadian Press, The Swiss have a penchant for movement; Walking, hiking part of everyday life. According to the article, the Swiss leave everyone in the dust as far as everyday exercise goes. That's because so much of walking in Switzerland involves the vertical dimension.

• Cartwright Tunnel Walking Trail in Montana. An unusual feature of this walking trail is a passage through a long dark tunnel in the mountains. KFYR-TV News story here. I've had dreams about that.

• All about the promotion of sustainable means of transportation, including walking and cycling, in Victoria, Australia in this Herald Sun article titled Workout to Work. As soon as more Americans learn to walk, the U.S. of A. can also start reaping the benefits of this inexpensive form of transportation.

Image: walkway in Battery Park City with no one there, Lower Manhattan. Coming soon on Walking Off the Big Apple: strolling Carl Schurz Park and more from the Upper East Side waterfront.