This Just In: AP Reports that Everything is Out of Control 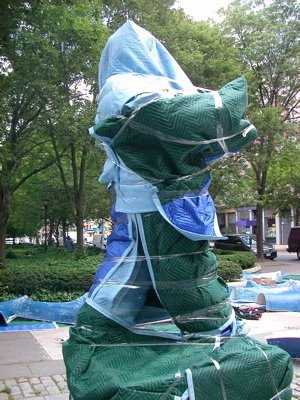 This morning, as soon as I got a grip on cleaning the kitchen, I noticed that my personal news ticker machine started spewing out reams of paper from the Associated Press reporting that things are falling apart and the center cannot hold. (AP wire report here)

The wire report argues that the natural and man-made chaos of late - floods, home devaluations, stock market shakiness, food scarcities, etc., threatens to undermine the myths of American individualism and free will. Furthermore, nothing will help get it back, the AP reports, including sublimating the Horatio Alger can-do spirit through sports spectatorship. Baseball players have spun of control, too, obviously victims of their own injected speed. The AP editors decided to release this information to the general public around 4 a.m. this morning ET. Apparently, while America slept, more things spun out of control.

I was ready to dismiss the story as bogus until I read about the four separate incidents in NYC this weekend of automobile drivers jumping the curb and careening into people strolling on the sidewalk. That's not right. (NY1 story here)

The argument for everything spinning out of control should gain momentum, I think, but it will likely tear apart in the face of centrifugal force and speed.

Image: Statue of New York Mayor Fiorello LaGuardia, LaGuardia Place, New York, covered in moving blankets on Friday, June 20, 2008 while the Buckminster Fuller Fly’s Eye Dome was being erected nearby. The statue was protected just in case the assembly process started to spin out of control. LaGuardia, the first Italian-American mayor and a Republican Episcopalian, modernized the city by cleaning up widespread corruption, overseeing public works projects, and implementing policies to help the city's poor. A man of slight stature, the mayor liked to be in firm control. We won't see his likes again.

Time to break out the old Operating Manual for Spaceship Earth.

UPDATE, Monday, June 23. Make that 5 incidents of vehicles jumping the curb and injuring pedestrians. Tragically, a fatality has been reported in the incident this morning (NY 1 story.)