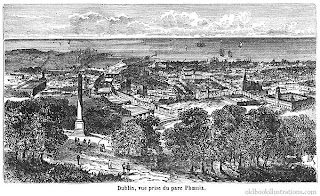 Note: This is an annual event. For more information, see this page on the Symphony Space website.

Today is Bloomsday, a high holy day for literary-minded flâneurs. Come to think of it, no self-respecting flâneur should be walking around today without such knowledge. Today is the today we celebrate Leopold Bloom' s stroll through the streets of Dublin on June 16, 1904 by pretending we have understood vast swaths of James Joyce's Ulysses and by making up for it by drinking Irish whiskey on the rocks and reading his prose out loud to inebriated friends. We'll also tune into various world-wide marathon broadcasts of famous actors with Irish names reading long passages from the scandalous modern novel, or we'll show up in person to Irish pubs that feature lengthy open mic readings.

This evening in New York, a city with an historically large Irish-American population, we can attend a star-studded reading of at least part of Ulysses at Symphony Space or catch the web broadcast. There, beginning at 7 p.m. Stephen Dedalus, whoops, I mean Stephen Colbert, and the uber-Irish brothers, Frank and Malachy McCourt, will read from the novel's Ithaca episode, followed by some music. Fionnula Flanagan will then read Molly Bloom's soliloquy. I am very disappointed that Stephen Colbert will not be reading this important and infamous passage.

Radio station WBAI has wimped out of its usual broadcast of the Symphony Space performance because of fears of violating the FCC rules for language. See New York Times story, Separate Bloomsdays for Theater and Radio by Colin Moynihan.

For WOTBA fans who have finished the required summer reading of Chapter i of Herman Melville's Moby Dick (see posting here) and are in need of another large project, see the complete text of Ulysses at Wikisource.