The East River and Roosevelt Island Walk, Part Three: The Renwick Ruins, or, The Smallpox Hospital 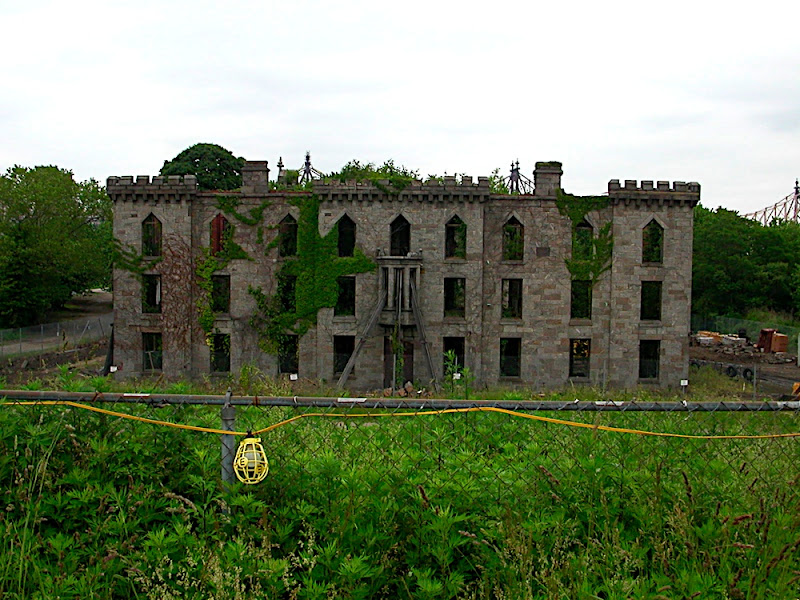 Tour Guide Narration: Known as the Renwick Ruins, in honor of architect James Renwick, the architect of St. Patrick's Cathedral and Grace Church, the crumbling edifice of the 1854 Smallpox Hospital at the southern end of Roosevelt Island looks much like the picturesque Gothic ruins of England. The Gothic Revival structure, granted the status of Landmark Site by the Landmarks Preservation Committee in 1975 on the basis of its picturesque ruination, is now undergoing a $4 million stabilization process in order to stem the tide of accelerating decay. There are no plans to restore the building and admit new smallpox patients.

When I came upon the sight of the ruins on my walk, I was indeed transported into a nineteenth-century state of the picturesque. I look forward to returning to the ruins with a drawing set and some watercolors. As I was leaving, I spotted many squirrels, birds, and a wild black cat frolicking amidst the decay.

The Renwick Ruins fall within the future site of Southpoint Park, a currently undeveloped area resplendent with the raw verdant energy of grass and wildflowers. While all is wild and beautiful beyond the ruins at the southernmost tip, efforts to build architect Louis Kahn's FDR memorial on the site could change all that. Strong opinions coming in a post ahead.

Images: The Renwick Ruins, Roosevelt Island. by Walking Off the Big Apple, June 5, 2008.

See Part One (about the East River unpleasantness on the Manhattan side) and Part Two (The Tram ride) of this self-guided walking tour of New York, The East River and Roosevelt Island Walk.

More images at Flickr WOTBA (with a sneak preview of more to come in the north part of Roosevelt Island).