Central Park: A Walk, and Lunch at the Zoo 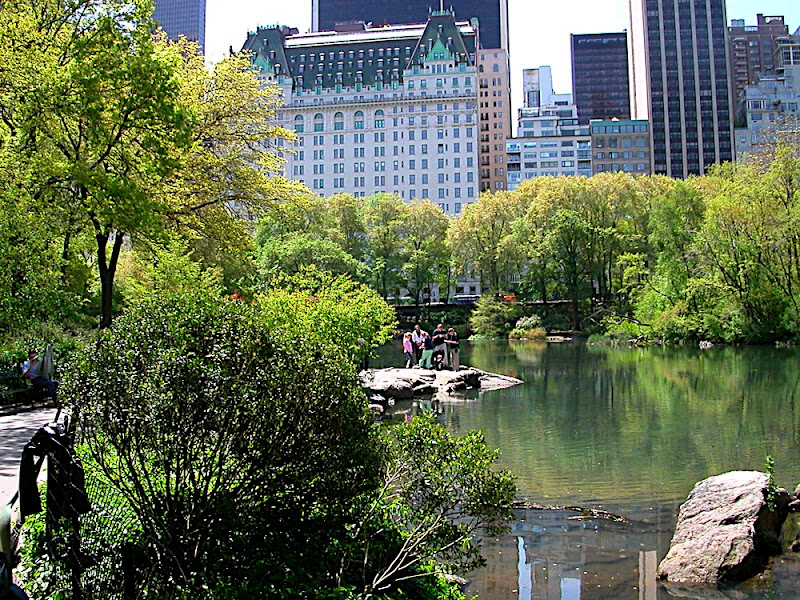 I'm continuing to enjoy sitting and walking in Central Park, and I'm back under the wisteria now, a Wi-fi hotspot, near the Rumsey Playfield. Since the last post, I started getting hungry, so I wandered over to the Leaping Frog Cafe at the entrance of the zoo to get a little lunch. I needed to find a salad and some fruit. The food offerings in the park are generally limited to two categories - hot dogs and ice cream. If you like hot dogs and ice cream sandwiches, you would love Central Park.

On my way to the zoo, I strolled down the wide Mall toward the Literary Walk (statues of an affected-looking Robert Burns, a serious Walter Scott, and a commanding Shakespeare) and then down to the Pond in the southeast corner of the park (as in photo above). More and more people are showing up as we speak, largely because it's 70 degrees with no clouds in the sky, and for the children, their teachers have made them come to the park. Several people are here under the wisteria, and many are taking pictures, including a guy with a camcorder and tripod.

The zoo is technically called the Wildlife Conservation Center, by the way, but most people know it as the Central Park Zoo.

Image above: The Pond, in the southeast corner of Central Park. That's The Plaza Hotel in the background. picture taken Monday, May 5, 2008, at approx. 12:30 p.m.