Central Park: Mapping Walks from Day 3 in the Park

Ah, yes, the walk around the Reservoir. I would like to be a runner and run around the Reservoir. Sometimes I jog. Mostly I walk. What you see here before you is the aerial view of the Reservoir (a good French word) in Central Park, and I can assure you that it's flat as a pancake. Otherwise, the water would all tip out. I walked around the Reservoir yesterday, reluctantly as I noted, and so enjoyed going back to the Delacorte Theater though there weren't any plays in progress. 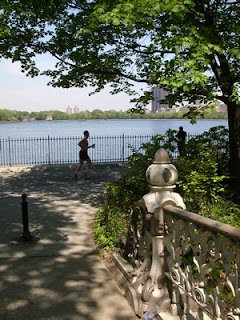 A word or two for those who might enjoy running around the Reservoir - signs posted there indicate that jogging, walking, running should be conducted in counter-clockwise fashion. Fortunately, anyone finding the jog, walk, or run tedious like me can bail out at regular intervals and join the slower paced crowd along the bridle path. In addition to walking, I'm sure I would enjoy riding a horse through the park. By the way, Olmsted and Vaux, the park's designers, were reluctant to add horse paths in the design, because at the time that's how people got around and they thought the park would be a nice break from the sound and mud of clomp-clomp-clomp. The pro-horse advocates got their way, kind of like the people that killed off congestion pricing.

Speaking of the Delacorte, the Wifi access is so good there that I think it would be possible to live-blog the summer Shakespeare in the Park productions of Hamlet and Hair. But it would be wrong.