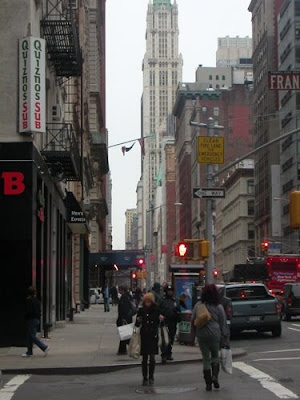 I have a Google Alert set up for the word "walking" that fetches all sorts of disasters. Many of the walking items in the news deal with terrible things that happen to individuals who are just out for a stroll and minding their own business. Bad things happen to good people walking home, going to work, and also to nice people trying to find meaning in life by sauntering near the railroad tracks. It's a disgrace.

I feel like our civil rights and liberties as walkers are constantly under attack. Maybe, one day, I will take up this issue in a public forum, and eventually, someone will notice my hard-working efforts on behalf of walkers. Maybe this advocacy will set a course toward the governor's office in Texas, my ultimate career goal.

On the other hand, walking news is sometimes full of hope. Thusly,

• The Dodos Walking Song
The Dodos, a duo, recorded a whole set of songs based on walking around. "All of the songs sort of wrap around this coming and going theme," says Meric Long, 1/2 of The Dodos duo. We love them, says I, in the royal "we." NPR story here.

• Walking Facing Oncoming Traffic
I, too, was always taught to walk toward oncoming traffic. A letter writer in Ontario, Canada thinks people are getting too slack in this department. I am in full agreement. I like to stare down anyone who is attempting to run over me so as to not get broadsided by strangers from the rear.

• Six Million Years of Walking Heritage, outlined in the NYT, explains new revelations about the long march of the upright.

• Reporter Walks Nervously Around War-torn City
Daniel Smith, writing for the New Haven Advocate, is braver than most people. Sometimes, you need to go for a stroll in the city just to get out of the house. The fact that the city is Baghdad, Iraq presents some issues. Story here.