The Tribeca of Duane: Duane Street and Duane Park 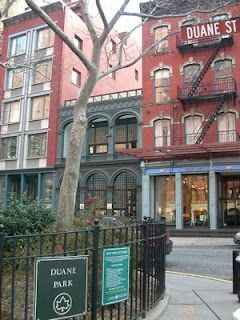 On my walks through Tribeca last week, I found that my head and feet propelled me toward Duane Park, whether I liked it or not. This particular triangular streetscape, with its little well-groomed island of a park in the center of the confluence of two streets, seems so pretty that there must be something amiss.

This section of Duane Street between Hudson and Greenwich is so sweet that when the weather warms up I want to bring back my set of portable watercolors to paint the scene. It's a quiet movie set of a place with a museum-like quality, reminding me that Tribeca recovered from its shell-shocked days after September 11 by becoming the home for the Tribeca Film Festival.

Not many people roam the streets. While visiting during the day, I've shared the street and park with a handful of people. A few fathers with children, nannies with babies in strollers, and a couple of twenty-somethings by themselves wandered about, most stepping into the welcoming Duane Street Patisserie for coffee and a treat.

The buildings that line the north and south sides of Duane Park represent various styles of architecture popular in the 19th century - neo-Renaissance, Romanesque Revival, Queen Anne, Federal, neo-grec, etc. Importantly, for the overall pleasant effect, these five or six-storied buildings conform to human scale. The exception of scale belongs to the former Western Union building at 60 Hudson St, a massive Art Deco monument that looms over the park like a mean nanny. It's a clean street and a neo-urbanist dream of mixed-use development, except for a mixture of social class.

Given Tribeca's status as one of the city's wealthiest zip codes and Duane Park well-kept by the lucky neighbors, I feel I've intruded just a bit by being here, cautiously stepping into someone else's yard. I'm paranoid. Nevertheless, I've come across so many references in the contemporary literature of New York about the city's decaying sense of place* that this idea of New York-as-Museum-of-Its-Former-Self has started to color my vision, too. Maybe that's why I want to go back to Duane Park with a set of watercolors.

Image: The Tribeca of Duane by Walking Off the Big Apple.