In Search of the Lower West Side: Before Tribeca 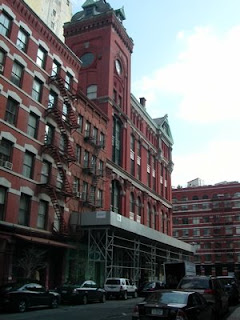 I've started to collect older guidebooks to New York so I can understand shifting perspectives on the city. Guides published in earlier decades provide an excellent window on how visitors understood New York as a place and also help me understand the psychogeography of the city's previous residents. When I wrote the extended posts on Greta Garbo's walks around her neighborhood near E. 52nd St., I read guidebooks published in the 1960s and 1970s to help me locate the places she would have likely visited.

No reference to Tribeca appears at all in the 1978 edition of the Michelin Green Guide for New York. The 1985 edition mentions the name "Tribeca " and explains the abbreviation. Michelin lists as its one attraction the Alternative Museum at 17 White Street, a downtown multimedia venue that now exists solely in cyberspace. The guide characterizes the area as a "neighborhood of old factories and warehouses which emerged as an artists' community in the 1970s." It was not until the mid-1980s that Tribeca started appearing on the marketable maps of the city. It was a dead zone in terms of a destination.

Not so in the Depression era. In the late 1930s, the area known as the Lower West Side was one the liveliest parts of the city. The fine WPA Guide to New York (Amazon, reprinted), published in 1939 as part of the Federal Writer's project, describes the neighborhood as pulsing with activity at all times of the day and night. Home to Washington Market, the largest fruit and market in the world, shippers, suppliers, and retailers crowded the Lower West Side to get the perishable goods quickly to their destination.

Beyond these activities, the WPA describes other businesses of the Lower West side, including fireworks dealers, a retail radio district, pet stores, ecclesiastical supply stores, and the enormous trading center for butter and eggs at the Mercantile Exchange at Hudson and Harrison. What particularly excited the imagination of the guide writers was the "Syrian Quarter" with its bakeries, pottery shops and restaurants. From the guide: "Although the fez has given way to the snap-brim, and the narghile* has been abandoned for cigarettes, the coffee houses and the tobacco and confectionary shops of the Levantines still remain."

Many of these older guide books inspire me to wander off in the city to see what remains in 2008. For my next foray into the Lower West Side I plan to take the 1939 WPA guide with me.

*A hookah. Funny how things come back into fashion.