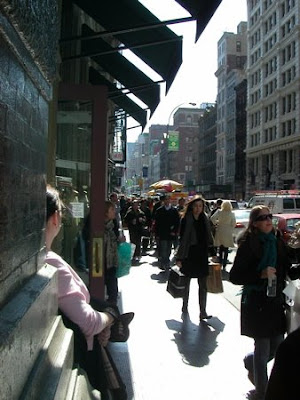 There's a special on the block on Broadway between Prince and Spring.

This afternoon, after raking through the closet, I decided it was time for a little early spring clothes shopping. Walking into the bright sunshine and down Broadway, I'm always a little stunned by the shopping hordes. After spending a long time by myself indoors, the mass of people on New York streets makes me think that something out of the ordinary has taken place. "What's going on?", I sometimes ask myself. In fact, nothing out of the ordinary, just the circumstances of my life now plopped down in the midst of one of the world's shopping meccas.

I'm an anxious shopper. I usually pick one store along a favorite stretch of Broadway, find several items that I think I can live with, and then turn around and go home. Late March is tricky for the seasonal transition, so I selected a few cashmere sweaters in pastel colors and called it a day.

Many of the women out on the streets were still wearing jeans stuffed into their fur-lined boots. The overall effect, and it's been like this for years, is that the most fashionable New York women dress like Davy Crockett, king of the wild countree-ee-ee.

(See also the popular post from the Christmas season, Shopping in SoHo Without Euros, for my list of shopping favorites.)

Tomorrow, follow along as I shop for party snacks, beverages, and flowers, and the behind-the-scenes preparations for 300 out-of-town visitors. A regular Mrs. Dalloway (site map by E.K. Sparks, Clemson University, October 2002), I am.