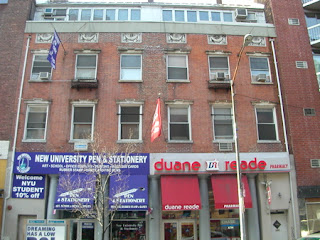 Born in Pawtucket, Rhode Island on March 21, 1881, Raymond Hood attended Brown University, the Massachusetts Institute of Technology, and the Ecole des Beaux Arts in Paris. Hood returned to the United States and established an architectural practice in New York in 1914. He didn't have much work, but he got a lucky break in 1920 when his landlord, Placido Mori, commissioned him to redesign his popular Greenwich Village restaurant on Bleecker Street. According to biographer and architect Walter H. Kilham, Jr.'s account, Mori gave Hood the assignment because, as Mori said, "He must be a genius–he eats so much!"*

As part of her epic journey documenting a vanishing New York, photographer Berenice Abbott took a photo of the restaurant in 1935 (see Museum of the City of New York website), and comparing her image with the image here it's easy to notice that some of the details of Mori's remain today. Hood added the top apartments, the Federal lintels above the windows, and the Doric columns.

Image: 144 Bleecker Street, February 12, 2008. WOTBA. Originally two Federalist era townhouses at 144 and 146, the facade of the building was resigned for Mori's Italian restaurant by Raymond Hood in 1920. The restaurant went out of business in 1938. The building hosted a variety of tenants until 1962. In that year the Bleecker Street Cinema, an indie art house, beloved in its era, opened in the building. After the cinema closed, a series of music venues occupied the building including the Elbow Room and Nocturne, as well as Kim's Underground Video. Most all of these businesses departed the location due to rising rents. It's an eternal New York story.

For a curious story about some lost murals from 144 Bleecker's wartime years and the history of the building, see this November 4, 1990 article from The New York Times archives.

Part of a series of posts relating to the New York buildings of architect Raymond Hood (1881-1934).

Lesson: If you want to design some place like Rockefeller Center, you gotta start somewhere.