The New York of Raymond Hood, Architect: The McGraw-Hill Building 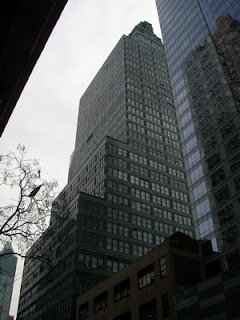 The McGraw-Hill Building at 330 West 42nd Street, built in 1930, is unusually blue-green. In fact, architect Raymond Hood's use of glazed terra cotta tiles in shades of blue-green constitutes one of the most ambitious applications of this material in the history of architecture.

A splendid example of the streamlined moderne style, the McGraw-Hill Building, built on a steel frame skeleton, sports plenty of light along its striped exterior and linear decorative stripes throughout the lobby.

Many architecture historians consider the McGraw-Hill building to embody the transition from Art Deco to the International Style largely due to its lack of ornamentation. Hood was a follower of the modernist master Le Corbusier, especially in his advocacy of a city of towers, and, certainly this building is a far cry from the Gothic idiom of the Radiator Building.

When I visited the building a few days ago, I was surprised at all the hustle and bustle around the lobby. Many kinds of businesses, art groups, labor unions, and civic organizations rent out space in the building. Given all the activity, I thought the building, especially the exterior near the entrance, looked a little worn and in need of some TLC. 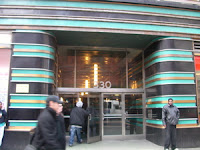 1221 Avenue of the Americas, built in 1969 as part of the expansion of Rockefeller Center, is also known as the McGraw-Hill Building and serves as headquarters for the McGraw-Hill Companies, a Fortune 500 company. 1221, one of the three "XYZ" buildings, is gargantuan, bureaucratic, oppressive and boring. (See New York City Skyscrapers site for image.)

Kitty said…
I used to work in this building and the Daily News Building. How funny?

I knew they were both iconic buildings but not Raymond Hood designs. Both were fun to work in. The McGraw Hill was falling apart a little but they did some repair several years ago.
8:15 AM