The Building that Would Glow at Night: Raymond Hood, Georgia O'Keeffe, and the American Radiator Building 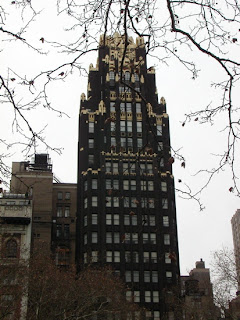 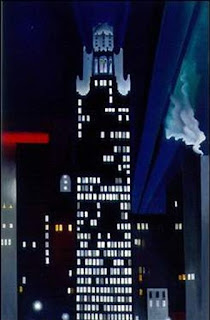 Designed by Raymond Hood, the American Radiator Building of 1924 fit the bill of the clients - it was massive, solid, and it would glow at night. While Hood wanted the building to look like a cathedral, he knew that the many window openings would overly lighten the heaviness. He solved the problem by making the facade black. He didn't want lights turned on in the building after dark but directed the upper floors to be illuminated with floodlights.

Georgia O'Keeffe not only painted the Radiator Building at night but with all the windows illuminated. The painting is one of several O'Keeffe made in the mid 1920s in response to the changing New York skyline. At the time she and Alfred Stieglitz lived on the thirtieth floor of the Shelton Hotel at 49th and Lexington, and O'Keeffe frequently walked near the new building.

O'Keeffe's painting of the Radiator from 1927 (the same year as Fritz Lang's Metropolis, tellingly) is remarkable for its color and for the depiction of the artificial light of the city night - the purple/blue tints of floodlights and the fluorescent whites of the office towers. There's a touch of warm incandescent in windows here and there. The stylized smoky steam arising from the building at the right echoes the flipped curved cornices of the Radiator's top floors. It's pure theater.

After Stieglitz died in 1946, his personal art collection of some 1,000 works was divided up among six museums. One benefactor was Fisk University in Nashville, a university Carl Van Vechten suggested to O'Keeffe. Among the artworks in the bequest was O'Keeffe's painting, Radiator Building–Night, New York. For a couple of years, the cash-strapped university has tried to sell the painting, now valued around $20 million, and at one point worked out a co-ownership deal with a new Walton-backed museum in Arkansas. The Georgia O'Keeffe Museum in Santa Fe, New Mexico tried to block the agreement.

See related posts about Raymond Hood on this website.