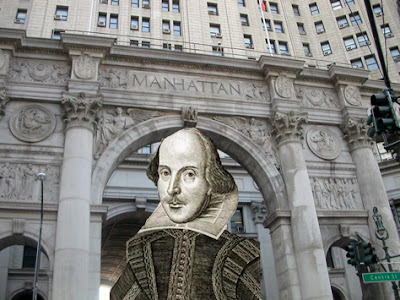 "How many goodly creatures are there here!" - Miranda, The Tempest (bonus points if you know the next line)

I always have it in mind to see every Shakespeare production in New York, because it seems like a goodly project, but it's nearly impossible to keep up with the Bard in New York City. I recently saw the Wooster Group's production of Hamlet (now closed) at the Public Theater. I thought their interpretation was brilliant in several passages but annoyingly distracting in others.

For those who believe Christopher Marlowe wrote some of Shakespeare's plays, take notice that the Red Bull Theatre begins previews of Garland Wright's adaptation of Edward the Second beginning Dec. 11.

Also, the Shakespeare Garden in Central Park is open during regular park hours.