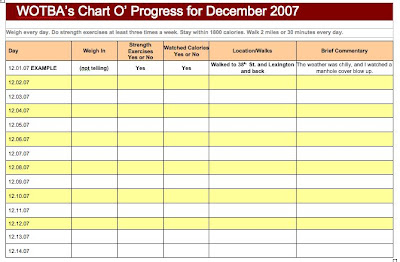 Flipping over the pages of all my dog calendars to December (the golden retriever wearing Santa's hat, don't you know), and noting that it's still in the early stages of holiday merriment, I have decided this very morn' that I need to lose six pounds this month, come hell or high water, before the new year.

A little alarmed about the lingering effects of Thanksgiving, and, frankly, anxious about my walking future through sleet and snow and, thusly, the ability to make metaphorical the lessons of Gotham's streets, I have taken up the task once again of puritanical chart-making.

Walking for exercise and weight loss, the raison d'être of Walking Off the Big Apple in her infancy as a website, low, just these four-and-a-half months ago, eventually gave way, as loyal readers know, to discussions cultural, economical, and philosophical. Art reviews and descriptions of New York's neighborhoods, new and old, pushed out posts on walking off slabs of beef. Diatribes about Wall Street and the Bowery took precedent over late-night confessions in chat rooms devoted to the overweight. Flâneurie replaced Câlorie.

I blame it on Greta Garbo.

When the New Year arrives in a month, and with it the endless and tedious feature stories we're all forced to read on post-holiday weight loss, I want to be able to skip all that and move on to worthy commentaries with a lot of meat.

So, here I go. I'm happy to share my chart-making je-ne-sais-quoi with anyone who wants to play along. You want to be WOTBA's diet friend, oui ou non?