The Pleasures of the Ashcan Artists: An Exhibit at the New-York Historical Society 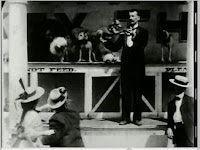 Many of the most famous paintings by members of the Ashcan artists, such as William Glackens' Hammerstein's Roof Garden and a pair of George Bellows' boxing paintings are currently on display in the exhibit Life's Pleasures: The Ashcan Artists' Brush with Leisure, 1895-1925 at the New-York Historical Society (170 Central Park West between 76th and 77th).

While visiting the exhibit this week I was happy to see collected in one place so many of the works that I knew. Studying the brush strokes and appreciating the scale of these paintings is, of course, only possible in person. Reproductions also tend to mislead when it comes to color.

The greatest pleasure was in seeing works that I didn't know as well, especially Robert Henri's pair of tall vertical portraits - Salome (1909) and Ruth St. Denis in the Peacock Dance (1919), and the exquisite Juliana Force at the Whitney Studio Club (1921) by Guy Pène du Bois.

The thematic approach of this exhibit focuses on the public pastimes afforded by developments in the urban environment at the dawn of the twentieth century. Grand boulevards, public parks, entertainment districts such as the notorious Tenderloin neighborhood, and critically important, the restaurant phenomenon, encouraged an electric spectacular of crowds, theatrical entertainment, and FLANEURS.

In addition to paintings and drawings, the exhibit features a few moving images, including Thomas Edison's entertaining Rube and Mandy at Coney Island from the collection of the Library of Congress. The film follows a tipsy couple as they make their way through the amusement park, riding cows and camels, shooting the chutes, and eating hotdogs. The short film includes fantastic views of Luna Park and "the Bowery" section of Coney Island. Many early films like this one may be viewed online at the LOC's American Memory site.

The exhibit, organized by the Detroit Institute of Arts, will continue through February 10.
A stroll from Madison Square Park to McSorley's, the subject of one of Sloan's paintings, would make an excellent Ashcan School walk. I'll get on that right away.

See related posts: A Walk to McSorley's and John Butler Yeats (1839-1922): Painter, Father and Personal Trainer to the Stars

Coping with Anxiety and Crisis: A Selected List of Fine Chocolate Stores in New York

November 07, 2008
Fears of recession, concerns about the state of the world, worries about job prospects, and anxieties about the future dominate the news headlines these days, but these kinds of stories are perennial, coloring the way we conduct our lives. Fortunately, we now believe that the 400+ ingredients in dark chocolate may alleviate some of the worst symptoms of this kind of external stress. Had a bad day? A little brisk walk to your local chocolate boutique may fix you right up. It's funny, but studies show that taking a chocolate supplement doesn't work as well for a sense of individual well-being as the act of eating a piece of chocolate. I understand. I think aesthetics matter. Eating beautiful chocolates can make you feel all yummy and special on the inside. My chocolate cravings can even be satisfied by unravelling the classic and minimalist Hershey's bar. Yet, I still prefer a visit to the city's finest purveyors of chocolate. At the following places (links provided), c
12 comments
Read more