List of Walking Off the Big Apple's Printable Maps 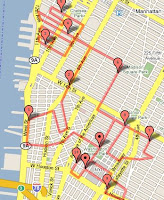 What follows is a list of links to Google maps I've created for Walking Off the Big Apple. These are all self-guided walking tours built around a theme and designed for visitors and residents alike. These interactive walking maps are meant to supplement many of the walks listed in the sidebar.

These are the routes that I've traveled and would recommend to others. I don't conduct walking tours myself, preferring to veer off chartered courses, but I like to think that people using these maps might bump into others at some point.

That reminds me. Once upon a time in graduate school, I took a course on Nathaniel Hawthorne and Edgar Allen Poe. I wrote a research paper comparing the two authors' use of urban imagery, and I argued that Hawthorne explores the street to comment on the individual's responsibility to society while Poe conceptualizes the city as a mental labyrinth. I'm looking at the paper now, as I've just fished it out of a trunk. I begin the paper with a speculation that the central character of Hawthorne's "Wakefield" brushed up against the voyeuristic figure of Poe's "The Man of the Crowd" in the streets of London of the 1820s.

While I find it a little daffy that I imagined a chance meeting between two fictional characters walking along the same street, I'm nevertheless pleased to discover that my interest in fictional urban geography started not this year in New York but years and years ago along "the Drag" in Austin.

As Cy Coleman sings, "Why try to change me now?"

UPDATED: Many more walks since this posting. See sidebar of website or visit Walking Off the Big Apple's Google Map page.